XaslamachThe Dark Messenger is rank II in The Rebellion from Kingdom Hearts: Foul Remembrance. He plays a very minor role in Sonata of Broken Dreams, but his and Anerel's (Larxene) daughter, Kira, is one of the main characters. He controls the Full Throttle nobodies.

Xaslamach has jet black hair that feathers over his purple eyes. A long black scarf that partially covers his mouth is wrapped around his neck. He wears a long-sleeved black shirt that is torn at the end of the sleeves. Much like the piece of armor on Aqua, he has a few plates of black and purple metal on his arms. Multiple metal belts in black, grey, and purple are around his waist and torso. His pants are baggy black jeans with many rips and frays on them. He wears black shoes with numerous black and purple metal plates on them.

He's probably the quietest of the ten nobodies in the rebellion, being kind of moody and gloomy like Cloud. This makes him get along better with Iopex and Zaxer. Although he is quiet, if one of his friends is being hurt, he will do anything to save them, even if it means killing himself.

Malachas lived happily with his two sisters, Cartina and Noctiri, and his brother, Myles, on Grand Surbia until the Heartless attacked that world. He, Cartina, and Noctiri were turned into nobodies and wandered the land until Zexion found them. Noctiri and Cartina refused to go with them and stayed on that planet. Zexion brought Malachas back and he was made rank XV in Organization XIII. He became friends with Xid and they spent their time together, soon finding out about the Waters of Hope and the power of The Dreams. They told Xemnas, and like the rest of them, were thrown in the dungeon. He was able to find out how to use the darkness to teleport and he saved himself and Xid from being exicuted. They found refuge in Radiant Garden and there they made The Hideout there. After a while, he and Xid found the rest of the nobodies exiled and took them to the hideout. They each felt like it was a new home, and only left when they needed to.

The weapons he can weild are large swords. Much like Ventus, he carries them in an unorthodox way.

His EX mode is called "Eternal Darkness", though unlike the other characters, he dosn't change his outfit, he gets an anti-form type appearance. During the attack, he throws the sword, which changes into two swords, in he air and they land one behind another. Then his hands start glowing and he puts them up in the air, summoning a large cloud of darkness that takes the form of a dragon. The swords start glowing and the dragon blows dark flame onto them, swalloing everything in darkness. Xaslamach then puts his hand out in front of him, calling forth more darkness. The darkness shoots out of his hands and goes through the hoops of darkness, making the darkness explode on the enemy usually killing it. 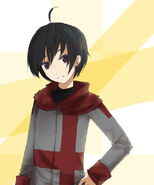 Malachas at a young age
Add a photo to this gallery
Retrieved from "https://kingdomheartsfanon.fandom.com/wiki/Xaslamach?oldid=82462"
Community content is available under CC-BY-SA unless otherwise noted.