"An eternal optimist, she tries desperately to escape the burden of her father's shadow."
—Description

Xaras Cullen (pronounced czar-us) is one of the main characters in Kingdom Hearts: Amelioratory Benevolence. A member of the ternion of Pact Wielders, she carries the Nobody third of the Pact. She is playable in the first arc, Our Penumbral Asylum.

Born and raised in Empire City, Xaras has never been outside the city limits. She is the daughter of a famous Gummi pilot, and as such been around the curious substance so long (with lessons from her father), she has a pretty great knowledge of how it works. As such, she is one of the most proficient Gummi mechanics in the all of Empire City despite her age.

Xaras tries to lead a normal life. As opposed to the lives lead by her future Pactmates Vylinn and Ryed, Xaras's schedule of school and helping her dad work on Gummi ships seems extremely tame. However, as much as Xaras tries to ignore it, there is a second face to her being that will not go away. Ever since she was little, most everyone, including fellow classmates at school, merely know her as the daughter of the famous Captain Cullen. The light of her fathers fame has cast a terrible shadow upon Xaras, who is expected to live up to her father's glory. Though she is a great mechanic in her own respect, that doesn't seem to be enough. To this end, Xaras dreams of one day surpassing her father so people will one day recognize her as an individual.

Only a hair shorter than Vylinn, Xaras is a thin girl with thick shoulder-length silver hair and dark magenta eyes. She is dressed in a mechanic's jumpsuit with the top half tied around her waist, black boots, a thick leather belt and a navy wifebeater. Lime green goggles and a black bandana with a silver X on it complete her look.

Out of the all of the trio of Pact Wielders, Xaras is by far the most cheerful. She takes her duty in stride, often cheering up Vylinn and Ryed when they go into their solemn fits. Despite the fact that she has no experience with weaponry, she is a quick learner, preferring active combat as her teacher. However, this does not stop her from being the most clumsy of the trio. Her fiesty nature also has a knack of riling up the others as well. 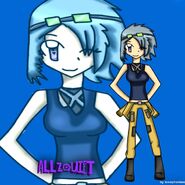 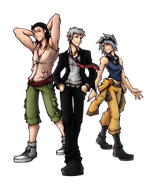 Retrieved from "https://kingdomheartsfanon.fandom.com/wiki/Xaras_Cullen?oldid=68420"
Community content is available under CC-BY-SA unless otherwise noted.