This article, Wicked Witch, is the creative property of Nobody Sovereign.

The WickedWitch is a boss that is fought exclusively by Alexis LaReine in Enchanted Dominion in Kingdom Hearts: Shadows of Eternity. It is a magic using Heartless, much like the Wizard.

The Wicked Witch will float around the battlefield trying to avoid contact as much as possible. Since it is resistant to most forms of magic, and physical attacks are your best bet, try to get in close and just let loose. It might blow you away from it with Wicked Wind, but don't worry too much. Instead, just get in close again and try to keep hitting it. It will intermittently cast spells like Witch Flame or Spell Shock. Most annoying is when it uses Woeful Healing, which is as good as Alex's Cure spell. To turn that into a positive thing, get it with Confusion to make it heal her instead. 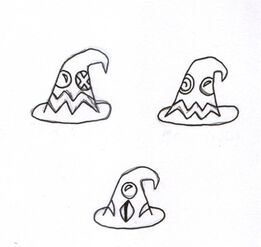 Wicked Witch's hat from various angles
Add a photo to this gallery
Retrieved from "https://kingdomheartsfanon.fandom.com/wiki/Wicked_Witch?oldid=73960"
Community content is available under CC-BY-SA unless otherwise noted.