This article, Valley of Four, is the creative property of Kiarichan.

The Valley of Four is one of the worlds in Kingdom Hearts: Foul Remembrance

The valley is split into four parts: Uncinia's Glade (summer), Aktor's Tundra (Winter), Dironic's Plateau (Autumn), and Trikina's Pasture (Spring). A huge tree stands in the middle of the valley, and is the mark of the place where all tribes can enter. The tree's name is Keration Nu Zoi and it is the power source for all creatures on that planet. The valley is about 100 miles long and 178 miles wide, making it one of the largest planets.

When the party goes to this planet, they find out that a war is taking place. The four gods that rule over the planet are fighting over land and other things. When the party meets each of the gods, the gods get their pick of who they want from the large party. The few people left tried to stop the gods from making the friends and tribes battle each other. Riku and Kairi freed the rest of the party (after battling the gods that they were with) and they met at Keration Nu Zoi to try to convince the gods war wasn't a good choice. Becuase of Xid's resoning, they agreed to not fight. T 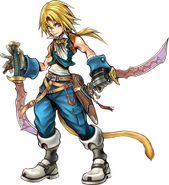 Zidane Tribal
Add a photo to this gallery

Retrieved from "https://kingdomheartsfanon.fandom.com/wiki/Valley_of_Four?oldid=74072"
Community content is available under CC-BY-SA unless otherwise noted.