Valdrann, also by his infamous title as the Shadow Emperor by all Kage-Shin and the known universe, an ancient and powerful entity from the time of creation of existence and considered himself to be a god. Believed to be the creator of the Heartless and Nobodies from discarded hearts and souls, corrupting them with darkness to serve him and his dark empire to embark on a crusade, and conquer Kingdom Hearts to remake the universe into his dominion.

Valdrann takes on the appearance of a large demonic humanoid with dark skin with purple tint, his entire face was slim and only a pair of dark red eyes, no mouth at all and flowing long white hair with a few fringes curved out. His horns which resemble a bull extend from both sides of his head and through his helment, clad in orange/brown armor and a black cape. According to Aeon, this was merely the form he took after he was defeated and imprisoned for over a millennia.

After regaining his full strength and absorbs a fragment of Kingdom Heart's pwer, Valdrann's appearance drastically changes into his original form, now only a slim but muscular built, wearing a black jacket with the coattails split in two and extend to the feet, light shoulder pads divided into four segments. His face became more human-like and horns now turned into antlers which split into four, extending outwards over his head and form just above his eyes. His right hand transofrmed into a claw and flame-like armor extending up to his shoulder, along with his legs and his hair now white and move in a wave-like movement.

Valdrann is a malevolent being who rules over all beneath him with an iron fist, feared and respected by those who consider him powerful. Manipulative, cruel and has a calculative mind in warfare. He would not hesitate to invade a less defended world or use anyone as hostage to draw their enemies' attention. Being a manifestation of chaos and darkness, driven by his nature to unleash his wrath upon the universe and end the meaing of hope, peace and order. He is always calm, never losing focus on his goals or panicks, even when he was foretold of the prophecy of which he was destined to fall by the being known as the Nephilim. The dark Primordial desires to rid himself of Aeon, his 'brother' and all others who oppose him, so that he be free to create a new age of darkness for eternity.

Valdrann was very patient and bid his time, plotting to start another war while being imprisoned for a thousand years, and used what remnants of his influence upon certain individuals to furfill his plans to escape. Showing little prejudice among other civilizations, as he comments that a mere human, one of the races he shows great disdain; cannot defeat him and saw the Kage-shin he created as a force of army to spread his influence. However he is willing to form alliances with few beings to furfill his goals such as joining forces with the Galactic Empire and considered the Darth Sideous and Darth Vader he achnowleges for their strong ties to the darkness. But just as he would make alliances, Valdrann would easily betray them once they served their purpose or failed him.

It is unknown how old Valdrann is, according to Yen Sid he was created at the same time as the very first gods and spirits such as the ancient Titans, Cronus and other deities, born from the darkness and manifested into the spirit of chaos and darkness. Valdrann existed for many eons in myth and legends on many worlds as his power grew and finally broke the barrier between universes, spreading his influence across the universe, thus creating what few know it as the Era of Darkness. Waging eons of conflict, chaos and wars wherever he went and grew ever more powerful. According to ancient scholars, Valdrann was worshipped as god and known by many names from various civilisations.

Some speculated that at some point thousands of years ago, Valdrann was the cause for the Rakata into becoming a war-like race that drawn to the dark side of the Force and the rise of the Infinite Empire. Another could be his influence in the rise of the ancient Sith Order and other shadow factions throughout many worlds and history.

As Valdrann's power grew, he created the army of darkness made up of newly created heartless by using the darkness to consume the hearts of beings, using his new army to create his empire and plans his war upon Kingdom Hearts over the course of the heartless beginning to evolve whcih thus gave the rise of the Kage-Shin; evolved forms of Heartless of every form; pureblood, emblem and nobodies alike. It was then his forces had waged wars agianst many civilzations as his growing empire continues to expand consume worlds into darkness, even faught against many spirits and gods who opposed him.

Until one day they encountered those who wield incredible power given to them by the one place he had desired to claim; Kingdom Hearts. The war between the Kage-Shin and the Keyblade Wielders expanded accross countless worlds and limited his forces from invading them through the doorways, including the Realm of Darkness, the primary use of the "corridors of darkness", inter-dimensional pathways that connect the many worlds.

Nearing the end of the war he grew more frostrated to wipe out all the Keybladers and reluctant to learn the secret of their power to make use of their own to travel through the "corridors" to the locked keyholes of the worlds sealed from them. Fought in the final battle against one of his greatest generals and powerful Kage-Shin, Karas who sided with a female Keyblade knight and sealed him in a powerful prison, thus almost his entire heartless army had been defeated and the remnants of his forces had scattered and laid dormant until his potential return. Ultimately killing them along with him.

Before his imprisonment, Valdrann was foretold of a prophecy of a child who would inherit the powers of the purest of light and darkness of which the parents would likely be a Kage-Shin and the Keyblade Wielder. The Nephilim as this child would be called would be the only thing to stand in the way between him and his goals.

Realising the closenss his opponents were he sent his remaining forces to make sure that prophacy does no occure until his revival. Given specific orders to his remaining Kage-Shin to find the Nephilim and prevent it's birth at any cost.

Even if the primordial darkness was trapped, his power of influence was far greater then anyone realised, using his followers to leave out false beliefs and answers to greater power to those who could revive him, his power of darkness had managed to manipulate few key individuals through dreams and whispers in their ears without knowing his presence, mainly towards Xehonart as his ultimate pawn to create the Organization XIII in false of offering them power to . Gathering the hearts of worlds with the strongest of light and darkness to forge the legendary χ-blade to unlock Kingdom Hearts and free him from his seal. His plans almost came into fruition, until somehow Ansem the Wise saw through his plans and destroyed ultimately delayed his return for several years, given the Keyblade bearers time to prepare.

His return shook many villians and magic users across the worlds upon his return, entire legions of heartless gathered before him, dropping whatever they were previously doing and welcomed their master's return.

Shadows of the Past

Valdrann has limitless access to the darkness, granting him incredible power, even commanding an army of Heartless and Nobodies by will. Despite his large size, he is very fast and agile, also able to lift objects larger than his size, possible a building. Considered to be the most powerful Kage-Shin of all, using darkness as his weapon and armor whenever he chooses for combat, such as manipulating the shadows into weapons or a shield barrier.

His main weapon is a large broad sword, When using his sword Valdrann is a very skilled swordsman in combat, able to wipe out entire legions of soldiers, sliced mountains with a powerful slash.

"Darth Vader, an honor to meet a Sith with your talents. I heared of how you slaughtered many Jedi in the end of this galaxy's war. The hatred you bare; such power and the strong embrace of the shadows. Such traits remind me of a certain... general who served beside me."
—Valdrenn and Vader on his Castle of Oblivion

"As Fear, Hatred, Anger and dispare spreads among worlds, I grow more powerful. This universe will once again fall into enternal darkness. My Heartless will feed upon the hearts of light and expand my dominion. Nothing shall stand in my way to claim what is rightfully mine. Kingdom Hearts."

"Whoa, time out! You are now in service of Valdrenn? The Shadow Emperor, the big bad himself who sided with my father back in the ancient wars! And almost brought the universe into chaos?! I LOVE that guy! I.m his huge fan-well, even if he is an all more scary old god then my old man!"
—Hades to Maleficent after hearing news of Valdrenn's return.
"The Shadow Emperor is not like any other you have ever met, my dim witted feline. He is being of pure darkness, legends say he is the opposite of the light of Kingdom Hearts itself. We must be very cautious when pursuing my plans for conquest, he does not take treachery very kindly. Not after that fateful event.""
—Maleficent Explaining to Pete about Valdrenn 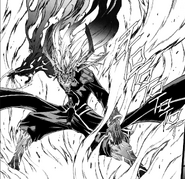 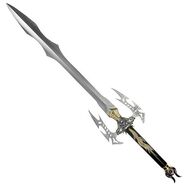 Death Walker
Add a photo to this gallery

Valdrann's appearance is mostly based on the character of Monster Rancher Moo and thought of his voice being provided by voice actor Jonathan Adams who played the voice of Vaatu in Avatar: Legend of Korra

Retrieved from "https://kingdomheartsfanon.fandom.com/wiki/Valdrann?oldid=89146"
Community content is available under CC-BY-SA unless otherwise noted.