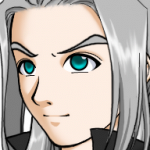 256 Edits since joining this wiki
January 26, 2010
WARNING! If you're allergic to the number one, wings, angels, or think this page will make you pregnant, stop viewing immediately and see doctor immediately!

"The things you want to say the most are the things you fight yourself the hardest not to say."
—One-Winged Angel

I was born and raised in San Diego which is where I've been my entire life. When I was two, I grabbed an old-fashioned can opener and began running with it. I tripped, severely cut my top lip, and was rushed to the ER. Now there's a scar where the cut was.

At the age of four my very first gaming console was the N64 accompanied by Super Mario 64. My N64 and Super Mario's "Television Appearances" have been replaced by my PS2/PS3 and installments of Final Fantasy and Kingdom Hearts. When I take my hardcore gaming experiences off the TV, I hold in my hands a PSP, DS, or 3DS.

I am a very bright guy with a very creative personality and is shy as well. Aside from gaming I love to write, mainly Lyrics. I also like to draw, mainly Furry due to being part of the Furry Fandom. Though I plan on being a Game Designer, my most important goal is creating an anime series. With my job as Game designer, I plan on creating graphics for amazing games such as Final Fantasy and Kingdom Hearts (or maybe even Final Fantasy and Kingdom Hearts themselves...). I have every manga volume available to North America except for the last half of Kingdom Hearts. I wish they wouldn't leave so much of the game out of the manga.

As part of my "World Interest", I like to keep my music's "lingual variety" wide. These are the languages my music is in:

More About Me & Music

When I listen to music I form an order or choose an already made/official playlist and once I start listening to the music, my law of "Sacred Consecutivity" comes into effect. It's my biggest pet peeve when my music is interrupted. Therefore the law is broken when:

Consecutivity comes from the word "Consecutive" and is made by me to be a synonym for "Consecutiveness" to replace the latter term. I refuse to use the proper word because I feel more comfortable with the one I formed.

This video remains online after the game's release for the public to compare my theories to the truth.

http://i273.photobucket.com/albums/jj210/phantomhourglassds/aafantasy47xz7.gif
Retrieved from "https://kingdomheartsfanon.fandom.com/wiki/User:One-Winged_Angel?oldid=72056"
Community content is available under CC-BY-SA unless otherwise noted.