Start a Wiki
Tawlong is a Kage-Shin and one of Valdrann's elite generals to lead his army.

Tawlong is a tall and slim, yet muscular built Kage-Shin. His face is concealed by a white mask, leaving his long flowing silver hair. Wearing white armor over the blakc robes and black baggy pants

Tawlong shows absolute loyalty to the Shadow Emperor and is able to control his emotions well even when threatened. Like many Kage-Shins he sees other forms as inferior and sees his species as a higher form of evolution, yet for reasons he shows respect to the Sith lord Darth Vader when the two empires formed an 'alliance'.

Tawlong seems to prefer using his full strength without releasing his true form, according to few who saw him at his full power Tawlong can be very dangerous in battle.

Shadows of the Past

Tawlong travelled Radient Garden on an imperial cruiser with Darth Vader on a 'peaceful' diplomatic mission between their empires. He first met Sora and knowing his reputation and role in the previous crisis. When the heartless attacked he made an appearance and watched the young keyblade wielder defeat a strong powerful 'heartless' and learned of his second encounter with one on his homeworld. Intruiged that he could sense one before it emerged from the realm of darkness.

As things turned violant when the Keyblade Wielders and their firends realised the Empire's true goal and wanted Sora or any other with knowledge to find Kingdom Hearts, Tawlong summoned the Schattenwächter  and revealed his true origins as a Kage-Shin and the return of 'his divine shadow' to the universe. 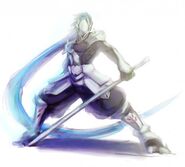 "So you must be the famous Sora of the keyblade. I seem to have pictured you a little... short from our intel have gathered."
—Tawlong's first encounter with Sora (SOTP)

"Perhaps I should make my full introduction to you all. I am Tawlong, a Kaga-Shin under servitude of his divine majesty, the Shadow Emperor Valdrann"

Retrieved from "https://kingdomheartsfanon.fandom.com/wiki/Tawlong?oldid=87458"
Community content is available under CC-BY-SA unless otherwise noted.