This article, Takashi Komuro, is the creative property of Baransu17.

My name is Takashi Komuro. I'm the incarnation of Felice Calandrino and the next leader of the Assassin Order". ---Takashi introducing himself as the founder of the New Asassin Order

Takashi Komuro is one of the characters that will appear in Kingdom Hearts: Generations. He is the main protagonist from Highschool of the Dead & will appear during the Dead of the World Arc. He is the descendant and incarnation of Keyblade Grandmaster Felice Calandrino along with being the founder of the New Assassin Order.

Takashi takes on a very strong resemblance to his ancestor Felice Calandrino (excluding the color of his eyes). When he first appeared he wore a Japanese school uniform with a red shirt underneath. After becoming a Keyblader, he changed his attire to a light grey short-sleeved jacket, light purple tee shirt, black pants, black fingerless gloves and white No Balance sneakers. He even wears twin bracers with the Assassin Order insignia engraved on them. His Keyblade Armor are also his Assassin Robes once worn by the legendary Ezio Auditore and his ancestor. During one of his missions, he discovered the Armor of Altair and later used it as his new Assassin Robes along with being his Keyblade Armor.

Takashi mentioned in the time before the Outbreak in his world, he was laid-back and does not mind skipping class. His casual nature can also make him hesitant, evidenced by the fact that he did not act on his feelings for Rei until it was too late. His passionate feelings are displayed when he is genuinely depressed by Rei choosing Hisashi over him. Takashi becomes more serious after the Outbreak and begins to exhibit qualities of a leader. His resolve to protect Rei and everyone else earns him respect despite his own feelings of inadequacy. He is usually kind to the other members of his group, and he does not hesitate to save people who are in serious trouble, such as Alice Maresato when she is attacked by "them". During the initial Outbreak, Takashi fights strictly for survival, but, as time passes, he begins to show a willingness to fight for himself and the group rather than just for the need to survive. Saya has mentioned that he and Kohta Hirano are likely to snap if their situation after the Outbreak continues and they have to keep killing things that look like people. However after meeting Sora and the others, he starts to gain more confidence in himself and the people he cared the most along with gaining back bit of his care-free personality.

Takashi Komuro was born to his father Akemi Komuro (a Japanese novelist) and to his mother Letizia Rapallino (a young Italian florist and teacher). Despite him spending most of his life in Japan, he actually spent his first four years in Rome, Italy. While still living in Italy as a little kid, Takashi encountered a man dressed in black who kidnapped him and strapped him into a machine. Before getting knocking out, the only words he heard was, "It's time for you to relive your past, Calandrino." When Takashi woke up, he found himself in a plane with his mother but his dad was nowhere to be found. Letizia told him his father along with the police found him in a warehouse with his kidnapper. Unfortunately the kidnapper took out a gun and shot Takashi's father without hesitation thus killing him. After living in Tokonosu City for a few years he befriends Saya Takagi in kindergarten and met with Rei Miyamoto who he fell in love with despite being a year older than him.

The Dead of the World Arc

The Mark of Mastery Games Arc

All or Nothing Arc 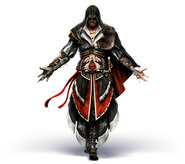 Retrieved from "https://kingdomheartsfanon.fandom.com/wiki/Takashi_Komuro?oldid=104525"
Community content is available under CC-BY-SA unless otherwise noted.