Spirit World is a world which appears in Kingdom Hearts: Signs of Zodiac. It is the fourth world that the heroes visit in their journey. The world originates from the anime film produced by Disney, Spirited Away. The people in this world know about the existence of other worlds, except for Chihiro who lives in another dimension of that world. 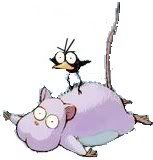 Sootballs
Add a photo to this gallery

Retrieved from "https://kingdomheartsfanon.fandom.com/wiki/Spirit_World_(KH:SoZ)?oldid=76523"
Community content is available under CC-BY-SA unless otherwise noted.