The Sorceror Nobody Keyblade's true form, as seen when it has its own natural Keychain attached, is as shown to the right. Its signature spiky design is largely a consequence of its Nothingness-based nature, as is the ever-changing red and blue pattern that covers its enture surface. Similarities with the Nothing-tendrils used by Xemnas and the Twilight Thorn are no coincidence, as they share the same basis in Nothingness, albeit with less purity.

The Sorceror Nobody Keyblade cannot ordinarily be so much as touched by any being who is even the tiniest bit existent, as the surface temperature of the entire weapon is absolute zero, and it is also entirely frictionless. The Void Gem embedded near the blade serves to draw out and amplify Nothing-based abilities, and magic channelled through the weapon is effectively cast from the Gem. There are also gaps in the shaft of the weapon, which are actually an intrinsic part of its structure – it can extended or contracted at will by adding or removing any number of the "floating" segments, at no cost to the rigidity of the shaft.

When shown the Keyblade, Master Yen Sid is able to deduce more of its special properties, some of which make it markedly different to any normal Keyblade.

As with any other Keyblade, the outward form of the weapon can be altered by attaching various Keychains, most of which have a powerful association with either specific worlds or people. Sorceror Nobody obtains several Keychains in the course of his travels. 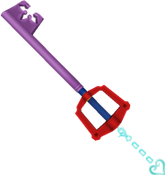 The Kingdom Key Σ is similar to Sora's Kingdom Key and King Mickey's Kingdom Key D, although the teeth have a cutout shape more reminiscent of the Sorceror Nobody emblem than the ubiquitous crown emblem associated with Keybearers. It does not have the shaft-extension capabilities of the Sorceror Nobody Keychain, and nor does it feature a Void Gem. The low temperature and lack of friction are also shifted to be within the realms of standard physical possibility, although they are still outlandish enough to prevent it from being casually wielded by others.

The name of the Keychain is clearly derived from the normal Keyblades that it resembles, with the Greek capital letter Sigma (Σ) speculated to perhaps be a very approximate rendering of the appearance of the weapon's teeth. Then again, it might just be a conceit on Sorceror Nobody's part, as Σ is equivalent to S, which could stand for Sorceror. Or, of course, it may be both of these reasons.

Retrieved from "https://kingdomheartsfanon.fandom.com/wiki/Sorceror_Nobody_Keyblade?oldid=57535"
Community content is available under CC-BY-SA unless otherwise noted.