Much like all Emblem Heartless, it has a dark-bluish color. It wears a bandanna, wrist bands, and pointed shoes, giving the appearance of a thief. It carries a small sack where it puts all the items it steals. Its weapon is a dagger with a confused eye and mouth, much like the Pirate Heartless' sword design.

All you have to do is quickly attack it and use Dodge Roll to avoid taking damage. When it successfully steals an item, it will run around until it disappear. The only way to retrieve the stolen item is to defeat it before it flees. 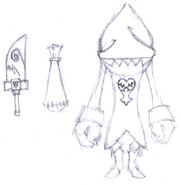 Artwork of Sneaky Snatcher
Add a photo to this gallery
Retrieved from "https://kingdomheartsfanon.fandom.com/wiki/Snatcher?oldid=65753"
Community content is available under CC-BY-SA unless otherwise noted.