This article, Shelke Rui, is the creative property of Kiarichan.

Shelke Rui is a neutral character who lives in Fifth Hope, a world in Kingdom Hearts: Foul Remembrance. She appears along with Shalua Rui and Vincent Valentine as the Final Fantasy characters in that world.

"A young girl who lives in the world Fifth Hope. She is very quiet and distant when around those she doesn't know. But, when she's around people like Vincent and Shalua, she opens up and acts like herself. Although she has the appearance of a young girl, she's actually nineteen." 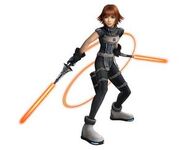 Her and her Nunchaku Sabors
Add a photo to this gallery
﻿
Retrieved from "https://kingdomheartsfanon.fandom.com/wiki/Shelke_Rui?oldid=74225"
Community content is available under CC-BY-SA unless otherwise noted.