"Here's some advice: Beware the darkness, stay alive, and give them a chance to be happy."
—Shadow to Mariya

Shadow the Hegdehog is a summon. He is voiced by Kirk Thornton.

Shadow is a loner.

Shadow is a black hedgehog with red and black quills. He wears red and white hover shoes that are a bit rusted from an unknown source and white gloves with golden rings and black and red cuffs.

Shadow is close to Maria. When she was murdered by GUN soldiers, Shadow decided to avenge her by destroying the entire human race. He abandoned his plan, later on, knowing destroying the humans would never help him avenge Maria.

"Have you considered using your wings?"
—Shadow meeting Mariya

Shadow first met Mariya in Wreck-it Ralph 2 when she fell from the window into his arms. Their friendship is not revealed until the film's climax when they team up to save Ralph from the MCP's wrath.

At first, Shadow was a bit annoyed by Vanellope, but as he got to know her a little more, he started to have a crush on her.

Kingdom Hearts: Remnants of the Past

An experiment brought to life by the good-hearted Dr. Gerald Robotnik. He is close to Mariya and vows to be there for her every step of the way. 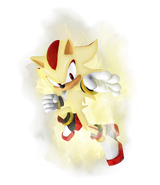 Retrieved from "https://kingdomheartsfanon.fandom.com/wiki/Shadow_the_Hedgehog_(FKM)?oldid=94111"
Community content is available under CC-BY-SA unless otherwise noted.