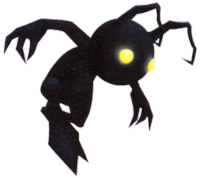 Shadow is a heartless appearing in Kingdom Hearts Pixar.

It appears as the weakest variety of heartless throughout the video-game up until it's transformation at the hands of Malelificent expanding it's abilities and health.

It is the most common recurring enemy throughout the travel through worlds up until the abyss of the above world.

The Shadow's appearence in Kingdom Hearts Pixar is completely identical to all other canonical and fanonical games of the series.

It is completely drenched in black for colour and appears flat when scaling the ground to uproot suprise attack the enemy.

Once completed the first three worlds of your choosing Malelificent unleashes the first heartless transformation boss which is the upgraded form of the common shadow.

However in large form it is several towering feet above you and glows dark red when enraged from attack.

The Shadow appears as the first heartless enemy for Sora to re-encounter while en route and in the forgotten realm.

It is summoned and controlled constantly by the primary antagonists of the world visited and minor villain Bomb Voyage of the Golden Age.

It after the completion of the first three worlds(which in order is your choosing) becomes the large emblem heartless morphed by Malelificent.

Retrieved from "https://kingdomheartsfanon.fandom.com/wiki/Shadow_(KHP)?oldid=41365"
Community content is available under CC-BY-SA unless otherwise noted.