Sabertooth Tiger Dinozord is the Dinozord of Nature piloted by Trini Kwan (Yellow Ranger). He originated in Mighty Morphin Power Rangers. As Alvin uses the Naturespark Gem to summon him, Eleanor joins in the battlefield.

When Sabertooth Tiger Dinozord is summoned with the power of the Naturespark Gem, he emerges from the jungle area of Deep Jungle. His running speed excels that of all the other Dinozords. He also has a mighty laser gun called the Smilodon Laser (サーベルガン, Sāberu Gan, "Saber Gun") on his tail. 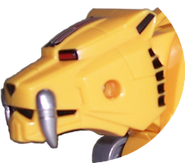 Add a photo to this gallery
Retrieved from "https://kingdomheartsfanon.fandom.com/wiki/Sabertooth_Tiger_Dinozord?oldid=102884"
Community content is available under CC-BY-SA unless otherwise noted.