Radiator Springs is a world in Kingdom Hearts Pixar serving as a central location. It comprises of three races of the

Piston Cup. It is baed on the Walt Disney Pixar Animated Feature Cars.

Sora, Donald and Goofy arrive in Radiator Springs firstly on the road Route 66 at night seeing a large living red car frighteningly speed away from heartless.

Sora and Goofy convince Donald into helping the mysterious living vehicle upon seeing that they transformed into faced living car replicas themselves.

The three pursue the red racing car along Route 66 swarming through heartless until a sheriff car tails the red racer into a strange deserted town.

Sora, Donald and Goofy follow but end up tripping a heartless tripwire crashing into many parts of the town making damage.

Up ahead the red frightened car also causes damage upon colliding with a car statue.

The four are eventually caught and put in the car of hapless tow truck Mater until the time of the planned hearing at Traffic Court.

Sora, Donald and Goofy learn of the car's history that he is Lightning McQueen a former famous racing car who is in ties to win the Piston Cup.

McQueen eventually escapes thanks to Mater and Sora, Donald and Goofy follow.

However the sheriff vehicle and female porsha siphoned McQueen's fuel leaving him to break down on Route 66 while Sora, Donald and Goofy still confused on how to move while being vehicles soon stop along with him.

The four are brought to traffic court where heartless attack and soon warded off by Sora, McQueen, Donald and Goofy.

The heroic act leaves them short of imprisonment but rather commiting community serive.

Sora, Donald and Goofy are missioned with helping the residents while McQueen tows the concrete paver Bessie.

Sora, Donald and Goofy upon completing their assingment learn they cannot escape until McQueen finishes the damaged main road.

Sora, Donald and Goofy then release McQueen in exchange for information on the resident heartless and how to drive as a car.

McQueen teaches both and shares the input that the controller of the heartless may very well be his arch rival racer Chick Hicks.

The group try another daring escape but are soon caught by Doc Hudson and challenged to a race.

Donald and Goofy fail immediatley in the race leaving Sora and McQueen who soon drive off a sharp turn cliff.

The group are then sent back to doing the road.

That night the heartless attack and Sora, Donald and Goofy are left to defend McQueen until he reaches the end of the road with Bessie.

Upon this the road becomes finished completely and the cars rejoice in the new road.

An accident occurs however as heartless attack and destory the town leaving Doc Hudson and Sally the Porsha to leave the group with finding the person responsabile for this attack.

Lightning, Sora, Donald and Goofy then enter the Piston Cup races and defeat Hicks in all the races releasing his anger which unlocks the darkness in his heart.

The aggravated Hicks then attacks and is defeated by Sora, McQueen and the gang.

The keyhole is revealed to be the Piston Cup and the world is closed which rebuilds the Radiator Springs main town. 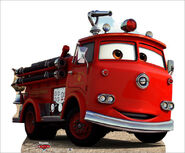 Add a photo to this gallery
Retrieved from "https://kingdomheartsfanon.fandom.com/wiki/Radiator_Springs?oldid=93835"
Community content is available under CC-BY-SA unless otherwise noted.