The Radiant Garden is a world in Kingdom Hearts: The Unsung War Trilogy. It is known in canon as the homeworld to a multitude of characters from Final Fantasy VII, VIII, X and X-2. It is also the original homeworld of Kairi.

In the Four Years since the events of Kingdom Hearts II, Radiant Garden was finally rebuilt to it's former glory, and beyond. It serves as one of six major shipyards in the Union of the Realm of Light.

The Ringed City surrounding the Castle District is Radiant Garden's Industrial District. It houses the Radiant Garden Shipyards and the site of the Fleet of Radiant Garden, as well as the flagship, the Heavy Command Cruiser Kestrel. The Shipyards and nearby Ship Breaking Yards are used to build and take apart ships. This area suffered a high level of damage during the Unsung War, but because of it being highly secure, the world managed to hold onto and rebuild the yards.

Another notable location is Ringed Square Garden, where many events, including combat tournaments, Association Football/Soccer Games and sporting events are held.

The Interior City is the mainly suburban and Business District of Radiant Garden. The Marketplace has expanded since Kingdom Hearts II. A Multitude of shops and stores selling goods are located here. Notable ones include Huey, Douie and Louie's Accessory Shop, Avalanche Armor Shop, Wantz's Item shop and a chapter of Rin's Travel Agency in that area. Down the steps past the item shop is the Borough, where many of Radiant Garden's residents live. One notable inhabitant is Radiant Garden Restoration Committee Member, Merlin. He was responsible for the reconstruction of many homes in the area, and offered his house at one time as a base of operations for the Committee before moving to Radiant Garden Castle two years before the Unsung War.

The Bailey is an extension of the residential areas, and is notable in connecting it's way to Radiant Garden Way (formerly the Restoration Site) which connects the Interior City with the Ringed City. The Border between the Interior and Ringed city is divided by the Castle Gates. The Interior city also is notable for the restoration of the Fountain Court, located at the Bailey.

The Outskirts is sparsely populated, however it serves a defensive purpose. The Ravine Trail is the primary form of defense, forming the cliff face over the Great Maw. As a reult, any potential invasion plans from that area are repulsed by long-range cannons, of which were used to great effect in the Battle of Radiant Garden. Down the Ravine Trail is the Crystal Fissure, which is used as a chokepoint for any invasion plans, serving as a guerilla outpost. The Fissure is also used for mining purposes, which can be used to create crystals for Laser-weapon technology.

Radiant Garden Castle (formerly known as Hollow Bastion) is the current headquarters of the Radiant Garden Restoration Committee. The Inner Castle Gates seperate the Castle Grounds from the Interior City. The Grounds itself is full of Greenery and Trees, a result of the work of Radiant Garden's resident Cetra, Aerith Gainsborough. The Base Level, which is the South Entrance, is a series of steps leading up towards the enterance to the Castle. The North Entrance, known as the Postern, is the area leading from the base of the Rising Falls, which also shows a wonderful view of that area.

The Entrance Hall is located on the first and second levels, and is were many events took place prior to the fall of Radiant Garden. Each level is accessible through the Lift Stop, a series of magic lifts seperated by magical barriers, however to avoid the confusion, Merlin used magic to streamline these lifts.

One Level below the Enterance Hall is the Waterway, which is an underground passage to the Interior City, leading to the Marketplace. Below that is the Dungeon. During the Unsung War, those Heartless captured would be sent here.

On the Third Level of the Castle is the Grand Library', there records of stories, both fiction and non-fiction, as well as maps and info on science, technology and history can be found here. The Library is one of four locassions accessible to the people of Radiant Garden. The Great Crest, originally having the Crest of the Heartless in Kingdom Hearts, now has the crest of the Union of the Realm of Light, and is located at the highest part of the center area. There is a High Tower, which holds the Bedrooms for many of the Restoration Comittee Members.

On the Northern end of the castle lies a series of Corridors on the Fourth Level lead to multiple rooms. The South Enterance leads to the Lift Stop, to the Eastern part of the Corridors is a set of double doors leading to the Castle Chapel, where Church service is held. Like the Library and Entrance Hall, the Chapel is accessible to citizens of Radiant Garden. Another accessible location to the public is the Grand Hall, where dances were held, the first time of it's use since Renovation was the Radiant Garden Festival, this is located to the North part of the corridors through a set of Double Doors. On the West area is a large room that is known as the President's Study (formerly Ansem's Study). The Study contains a desk as well as files from the Restoration period. It also contains a computer with a well established database, including information on Ansem and Xeanhort's prior research. It is also where much of the power is generated for the world, through an intricate Power Station behind the Study.

The Villain's Vale originally served as Maleficent's HQ during the events of Kingdom Hearts II and onwards until her eventually defeat at the hands of Leon and Sera Cross during an attempted coup on the Heartless Empire ended in catastrophic failure. Now the spires sit mainly ruined and untouched since Maleficent's fall.

The Cavern of Remembrance originally contained the data of Organization XIII, but upon acquiring the data to be used as training for many Special Forces Task Force Units, such as Task Force 108, the Cavern and especially the Garden of Assemblage serves as a cemetery of sorts. The Garden of Assemblage contains a statue of Ansem the Wise, ruler of Radiant Garden before the fall of the world at the hands of Xeanhort. The Cavern itself is essentially another mine outside the Crystal Fissure, which contain various minerals.

The Radiant Garden Government is run as a Unitary Parliamentary Republic, similar to the United Kingdom. It is only a de facto Constitutional Monarchy, the only reason for it not being the case is due to the disappearance and death of the Original King, Ansem the Wise, leaving no official heir to the throne. There is currently an issue as to either find a new King to take his place, or abolish the monarchy and institute a Republic, akin to the Government of Nomanisan Island. 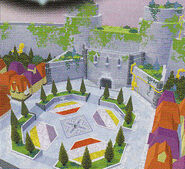