This article, Prologue, is the creative property of KeyofRemembrance.

Thinking of you, wherever you are.
'We pray for our sorrows to end, and hope that our hearts will blend.
Now I will step forward to realize this wish.
And who knows: Starting a new journey may not be so hard or maybe it has already begun.
There are many worlds, but they share the same sky—— one sky, one destiny.

"I can hear the waves," a voice whispers. "They sshh sshh on the moonlit sandy floor on the beach... They call out in a calming and serene like sound... And a voice... A faint, but familar voice calls out to me... Adale! The voice says to me, but who is this voice...? The friend... I forget... or forgot... I want to say hi.. But I can't remember your name... Who are you? I can't remember... your name... But why.. can't I remember? This is always in my dreams and maybe my memory, too. Where can I find you again?" The voice asks.

—Dive to the Heart: Station 1— 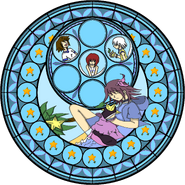 Before she could even go on to the next Station, the dream was being interrupted by someone waking her up. "Get up! Sleepy head!" The person said and giggled after she woke the girl up, "It's a bright new day. Time for a new adventure wouldn't you say?" The girl giggled and smile.

The other girl, the one who had been rudely woken up, she was upset with the girl who was so cheerful, "Yeah, well! How would you like it if I rudely woke you up in the middle of a dream?!" She groaned. "Ah.. Sorry.. Pardon my intrusion, but your father sent me into your room.. So, I sorry about that.. You're gonna.. a-ah... C-come right? I mean i-if you want to. It's your choice after all," The girl said walking closer to the door.

"Hm...? My chocie? What do you mean?" The girl in the bed asked. "Well, you know... It's a certain someone's birthday is all," She said. "Birthday!? AH!?" The girl in bed laugh, "Why, it's mine and my twin brother's birthday!" She couldn't help but laugh at herself for forgetting all about it.

The end of Prologue.
Click here to go to the Next Chapter; Chapter 1

P.s. Don't chat in the Story. Comment in the Talk box above. Thank you.

Retrieved from "https://kingdomheartsfanon.fandom.com/wiki/Prologue?oldid=59222"
Community content is available under CC-BY-SA unless otherwise noted.