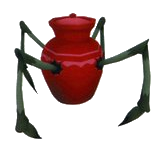 Pot Spider is a common heartless in Kingdom Hearts Pixar and cousin of the Scorpion Pot Spider and Barrell Spider.

The Pot Spider appears as a ruby red pot with a cylindar handle which upon close inspection suddenly sprouts large spider legs of the colours lime and grey.

In Kingdom Hearts Pixar upon various combination attacks on the pot spider does the pot break releaisng the hidden spider heartless inside it.

The true form is of a combination between common shadow and spider as it has the coloured legs and flat black drenched body of a shadow.

It has red glowing eyes in place of yellow.

Retrieved from "https://kingdomheartsfanon.fandom.com/wiki/Pot_Spider_(KHP)?oldid=41366"
Community content is available under CC-BY-SA unless otherwise noted.