Nexus is a main character that appears in Kingdom Hearts Symphony of Memories. He is the Nobody of Suné, and is Number VIII in Shadow VIII.

Nexus's design was taken from Roxas, though there are some changes. As Suné's Nobody, Nexus's facial features closely resembles his. Like Roxas, Nexus have blonde spiky hair as opposed to Suné's brown hair and wore the Black Coat like him. 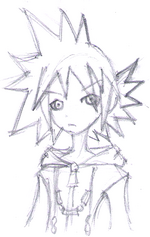