This article, Nexin, is the creative property of Kiarichan.

Nexin (Enin) The Illustrator of Sorrow is rank X in The Rebellion from Kingdom Hearts: Foul Remembrance. She joins the party in Grand Surbia. Her nobodies that she commands are the Fesitval-Goers.

"An odd girl who has a passion for painting. Watch out for her giant paint brush! It might seem harmless, but it can certainly pack a punch! Her pet Smeargle, Forte, is always there for a helping hand."

Nexin has long, rainbow-colored hair that partially covers a golden horn that juts out from her forehead. She wears a pair of bright blue short overalls that have paint splatters of over them. Under the overalls is a bright orange short-sleeved shirt. On her hands are neon pink and yellow fishnet gauntlets that come up right below her elbows. At the top of the gauntlets are tufts of bright green gauze. She wears striped leggings in bright green and orange that come just below the knee. At the end of those are tufts of electric purple gauze. Her shoes are highlighter yellow converse-type shoes that the top folds over to show a neon blue and bright red checkboard design.

She is very happy and helpful, but she can zone out very easily. Also, when she is zoning out, her hand usually paints an oracle. When the Adephagos, a large, aurora-looking monster that appers in the sky, comes into sight, she just stares at it as her hand is painting a prophecy on whats to come.

Her primary weapons are giant paintbrushes, but she can also use bow-and-arrows.

She can perform powerful white magic and de-buffing skills along with medium-strength physical and buffing skills. In battle, she is best used for curing allies and weakening the enemy party.

Her EX Mode is called Creature of Yore, which is when she turns into a rainbow-colored unicorn with a golden horn. Her attack, Lore's Mind, during which a huge wave of color and magic pass over the enemy party by shooting a large projectile from paintbrush or arrow from bow.

*"I remember lying down in a open field filled with flowers. I pushed myself up slowly to see a majestic being wlaking towards me. It was... a Unicorn. A white one to be exact. Blood and wounds covered by face, hands, and body. It looked at me sadly and leaned down. "You shall be well thy hurt one. But, there shall be one consiquence." Its golden horn touched my forehead and a great power surged through me. All the blood and wounds left, but when I touched my forehead, the horn was there. * 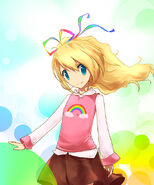 Enin at a young age
Add a photo to this gallery

Retrieved from "https://kingdomheartsfanon.fandom.com/wiki/Nexin?oldid=63878"
Community content is available under CC-BY-SA unless otherwise noted.