Nanaly is one of several original character of Kingdom Hearts Symphony of Memories. She is one of Suné's best friends.

After Sune woke up, he met a girl named Nanaly and boy named Keldric. The three quickly became friends.

Nanaly is a 15 year old girl with blue eyes and brown hair. She wears a pink mini-dress with a white halter top underneath it and a black sleeves, similar to Kairi's. She also bears a strip of blue cloth tied around her waist that drape over her hips. She also wears a wristband on the left hand and two black bracelets on the right. Finally, she wear a pair of pinkish-purple sneakers with a similar design as Sune's. Also, she sometimes dons a white bonnet with a heart from the Kingdom Hearts logo and a moogle clip. 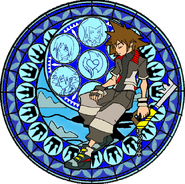