The Mirage Arena has a futuristic look that resembles that of Space Paranoids. The main area of the Mirage Arena is called the Hub. It appears as a large, mostly hollow, blue sphere floating in space. There are several small, flashing electrical towers on the outer surface, as well a very large version of the same type of tower and a thin, grey tower. At the bottom of the sphere is a grey, triangular shape, while at the top is a large, saucer-like structure with cables running underneath. The structure is surrounded by two concentric rings that constantly rotate about the sphere. The rings have circuitry running along the outer edge, and a pattern of triangles on the inner edge. There are also ghostly rings around the bottom of the sphere and another half-ring running around the center of the structure.

Floating a distance from the large sphere is a hemispherical platform with a Save Point and a transporter to the lobby. The player enters and exits the Mirage Arena from this platform.

While most events occur in different areas in other worlds, some Arena matches take place in a Battle Arena, in which red screens of various shapes surround a circular field colored various shades of blue. The surrounding space can be seen through the windows in this area. A third area, also used for battle, places players in a room with a dark floor and walls.

The Mirage Arena has no real purpose in the story, only existing for a place to level characters and for fun battles. The Axen Remnant can be found and fought here, after Part 2. 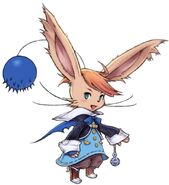 Moogle
Add a photo to this gallery

Retrieved from "https://kingdomheartsfanon.fandom.com/wiki/Mirage_Arena_(Awakening)?oldid=72077"
Community content is available under CC-BY-SA unless otherwise noted.