The Mephilians are creatures of darkness that first appeared in Kingdom Hearts Ultima. They are extensions of Mephilose Draygohn's will, similar to how the Unversed are extensions of Vanitas from Kingdom hearts birth by sleep.

Mephilose considers the Mephilians his "Children", and sends them to go after worlds, and plunge them in darkness as well as killing anyone who gets in their way.

They are instinctual creatures, and take many forms. When defeated, they turn into a pile of Purple ash. 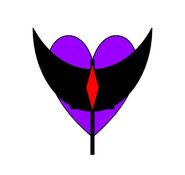 Mephilian Emblem
Add a photo to this gallery

Retrieved from "https://kingdomheartsfanon.fandom.com/wiki/Mephilians?oldid=84176"
Community content is available under CC-BY-SA unless otherwise noted.