Itachi Uchiha gained the Mangekyo Sharingan by killing his best friend, . With the Mangekyo Sharingan, Itachi was able to use at least three of the most powerful jutsu. The first was Tsukuyomi, an extremely powerful illusion that allowed him to torture opponents for what seemed like days in a matter of moments. The second technique was Amaterasu, a substantially potent technique, which creates virtually-inextinguishable black flames at the user's focal point that continue to burn until the target is reduced to ash. The last of these techniques was Susanoo, which allowed Itachi to summon a massive ethereal warrior. This entity fights on behalf of Itachi and shields him from all attacks, rendering Itachi essentially invincible.

All of these techniques use massive amounts of Itachi's power and, in addition to damaging his eyesight, put a great deal of strain in his body. During his final battle against Sasuke, Itachi's eyes were even shown bleeding after using the Mangekyo. He also told his brother that he wanted to take his eyes so that he can restore his eyesight and gain more power.

is the first Uchiha to gain the Mangekyo Sharingan. His Mangekyo took the form of a ring with three circular holes in it. He eventually grew blind from overusing it, and only by taking his younger brother Izuna's eyes did he regain his sight. This also gave him an "Eternal" Mangekyo Sharingan that gave him great power. His Eternal Mangekyo Sharingan looks identical in appearance to Madara's first Mangekyo combined with Izuna's Mangekyo.

Madara, has shown the ability to use an unnamed space/time technique which makes him nearly invulnerable and allows him to teleport to different places at will very quickly, but it's unclear if this is a result of his Mangekyo Sharingan. He may likely also be able to put out the so-called inextinguishable flames of Amaterasu quite easily.

Izuna Uchiha acquired his Mangekyo Sharingan soon after Madara did. His took the appearance of three bars stretching out of his pupil. Madara later took Izuna's eyes to regain his lost vision. In Madara's story, however, Izuna volunteered to give him his eyes for the clan's sake.

Sasuke Uchiha awakened his Mangekyo Sharingan after the death of his older brother, Itachi. Sasuke's Mangekyo takes the appearance of a six-sided star. Unlike other Sharingan, which have a black design and red background, Sasuke's Mangekyo is the first one that is shown to have a red design and a black background. The first ability Sasuke has displayed using the Mangekyo is Amaterasu. His skill with Amaterasu might be greater than Itachi's as he is able to control the flames with his right eye. He suffers from the same drawbacks from using it as Itachi did, as his eye strained to the point of bleeding, as well as his eyesight gradually began to deteriorate. He can also put out Amaterasu.Sasuke has displayed the ability to use Susanoo, which he can manifest as a mere rib cage or a full form capable of attacking others. Sasuke has also been seen using illusion techniques with his Mangekyo Sharingan on two occasions that boast similar effects as Tsukiyomi. As with Itachi's version, they are powerful enough to break down the will of the intended victim, and even cause paralysis.

Xirbealg acquired his Mangekyo Sharingan under mysterious conditions after training with Sasuke in Twilight Town. He demonstrated all the abilities Sasuke has while using it and has used the ability copy technique to great effect even creating a replica of Ichigo's Bankai. 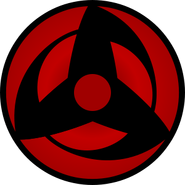 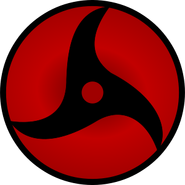 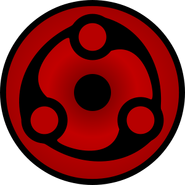 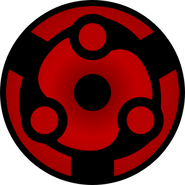 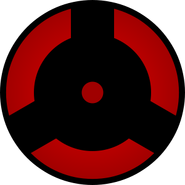 Izuna's Mangekyo
Add a photo to this gallery
Retrieved from "https://kingdomheartsfanon.fandom.com/wiki/Mangekyo_Sharingan_(KH:RTD)?oldid=74453"
Community content is available under CC-BY-SA unless otherwise noted.