View source
watch 01:36
We're Getting Mutants in the MCU - The Loop
Do you like this video?
Play Sound
File:Blue Rhapsody KHX.pngThis article is a stub. You can help by expanding it.

Mammoth Dinozord is the Dinozord of Ice piloted by Zack Taylor (Black Ranger). He was originally known as Mastodon Dinozord in Mighty Morphin Power Rangers. As Alvin uses the Iceglisten Gem to summon him, Simon joins in the battlefield.

Mammoth Dinozord's heart of pure light allowed him to be preserved in the form of the Iceglisten Gem. Elsa the Snow Queen has been keeping the Iceglisten hidden in her Ice Palace until Alvin finds it for Simon.

When Mammoth Dinozord is summoned with the power of ice, he emerges from a glacier in Arendelle. He can blow glacial gas called Mammoth Blizzard (モスブリザード, Mosu Burizado, "Moth Blizzard") of -200°C from his trunk to freeze his enemies. 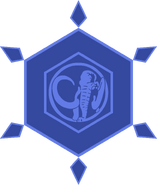