"Prepare to di- *phone rings* Hello?
Ah yes, sorry. I will kill you later. I got a delivery of DVD's."
—Malevolence Ribbons Crystalised

Malevolence Ribbons Crystalised is the XIII Member of the Holy Blade Order and a major character in Kingdom Hearts: The Final Remnant.

"The card XIII of The Holy Blade Order. The God of Hatred. The Fallen Angel.

This God has many titles. But all retains to be evil...

Violence alone escapes. the feeling of poverty of those realistic experiences. Only the extremism of desire and of death enables one to attain the truth."

"A young Holy Blade Order newbie and the

nobody of Katherine. She is lazy and does not like being commanded through she can be nice at times. "

"Why do I Malevolence Hate things so much?" -Malevolence Ribbons Crystalised

Malevolence Ribbons Crystalised is Katherine's Nobody, though not much is known about her....

"Malevolence How many times have you Helped me? I personally think you're an Angel..."

"I am no angel... I am Death... Obviously!" - Cream to Malevolence about Her Assistance in The Order

Malevolence is a minor character in Season 1.

Her only Appearance is Chapter 12.

"You wont mind if I continue your Legacy, Cream?"

She only makes an appearance to tell Ribbons that she will Take Control of The Holy Blade Order, which results in Cream's hatred torward her.

The Last Scene Shows Malevolence with the Remaining Survivors of The Holy Blade Order.

"No! Nay! Forget It! I Said im Evil!" - Malevolence to Katherine as she asks her to be on their side

Malevolence is the main antagonist of Kingdom Hearts: The Holy Blade Order.

Her Title in The Holy Blade Order is XIII which means Death.

The God of Hatred is her Final form despite the fact that she never changes her apperance once she is The God of Hatered.

Chapter 11: The God of Hatred

She makes an Appearance at Chapter 11 to Battle with Katherine.

Eventually she will kill Healing instead of Malevolence. Making Malevolence and

Chapter 12: The Angel, The Devil and The God.

"Truth is I am not like you fools who will use a Sword, Keyblade nor a Bow and Arrow.... *Pulls out a Twin Pistols* . I am not a fool..."-Malevolence

Malevolence and Katherine will Battle

Malevolence's Death. with Thirteen of the Holy Blade Order Members down.

Could there be more?

"Why is she absent? we need her now."

"No! not Malevolence! Troisnyxetienne!" -Noah and Amy referenced Malevolence

Malevolence Ribbons Crystalised is 7 years old set in this series.

She does not make large debut but only a reference by Noah and Amy.

"If she is immortal I win the bet!"'- Lucas about Malevolence

Malevolence Ribbons Crystalised has complete immortality during the event's of The Last Order. The Code is stolen from Charles zi Brittania, the emperor of Brittania, and because of this she is mistaken to be a hidden daughter of Charles. Later on she becomes the empress of Britannia after the death of Nunnally Lamperouge and Lelouch Lamperouge by her hand.

This Geass is the main Terminology of Kingdom Hearts:The Holy Blade Order. This particular Geass is described as, "The power that returns all creation into nothingness." Malevolence has a kind of obliteratiion attack launched by contact of her hand to something, such as a Keyblade. It causses massive damage and destroys it indefinately. Sazumiya's version of "The Zero" is described as the key to "Eden Vital". It can open the "Door to Heaven", creating a portal to Eden Vital which The Holy Blade Order are planning to use to collect the conciousness of humanity and exterminate it along with killing God.

XIII: Final Fantasy Is Malevolence Limit Break, which summons multiple katanas to fall from the sky.

Once all katanas are in position a large explosion will occur.

This Weapon is Light, Swift and Sharp. and has a cover which acts as an automatic shield.

This weapon is used along with a Pistol.

Malevolence is the only character who never has used a sword nor Keyblade, but instead uses two pistols.

"Everyone is powerful... but they all have a weakness..."-Lunar

"Not All Stories has a happy ending..." -Malevolence During the Final Battle

"You're my Complete Being.... Kathrine...?"-Malevolence Discovering Kathrine was her complete being

"I am God Kathrine... though I bid thee Farewell..."-Malevolence to Kathrine in the Bad ending

"There is no God.... Your Future after death is nothingness...."-Malevolence

"I must send my Elite Squadron.... of Peguin looking Prinny's...." -Malevolence about her Elite Army

"If the Leader will not move so will her Soldiers." ( Start of the Battle)

"Perish.. at my sight at once." (Defeated an Enemy)

"That ... I ... I reject you, and I reject everything you believe. Why do people lie, it isn't only because they struggle against each other, it's also because there is something that their seeking. You now want a world without change. How stagnant, you could hardly call it life. The same as a world of memories, just a world that's closed and completed, that's a place I wouldn't want to live in." ( Defeated Lucas )

"The only ones who should kill, are those who are prepared to be killed...." (Defeated)

"Its... Not... Yet.. Finished. You're Death is still Certain!" (Critical Lifestream)

"Hahaha... Do you think its over? Think Again Fool! Wired Geass, The Zero!!" (Using Her Geass)

" A God against an Angel obviously I would win Katherine.... Bye Bye..." (Wining against Katherine in the Bad Ending)

"I hate to kill but this is the onyl way! W-Wired Geass, The Zero!" (Using her geass)

Played During Her Final Battle *rather Humorous huh?*

Being the protagonist she is in every episode. 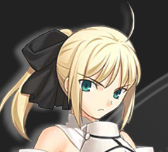 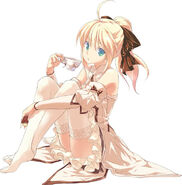 Extra Image for Neutral Form War
Add a photo to this gallery
Retrieved from "https://kingdomheartsfanon.fandom.com/wiki/Malevolence_Ribbons_Crystalised?oldid=39793"
Community content is available under CC-BY-SA unless otherwise noted.