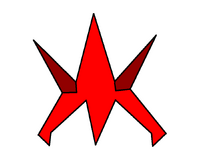 The Madsouls (マッドソウル,, Maddosouru?) are the main enemies in Kingdom Hearts: Heartspawn. They also appaer in Kingdom Hearts: Soul Story. They are similar to Heartless, as they are created when one's anger and hate take a physical form.

Madsouls have the ability to release people's hearts, as well as those trapped within Heartless, they use the hearts of Heartless to utilize their attacks, they kill the Heartless in progress. They are known to show a heart under them, the color of the heart depends on which attack. When the Heart is red, it will attempt to spin at you, it causes major damage but is blockable but extremely hard to dodge. If it is yellow, it can shoot a laser from the top of it that bounces around the floor, the walls, the entire area, the laser won't stop until it hits a target, you or a Heartless and it is extremely powerful. If it is blue, it will shoot a heart-like shape anywear on the floor, it is blue and if someone steps on it, they are trapped and cannot do anything and is highly suseptible to damage.

Retrieved from "https://kingdomheartsfanon.fandom.com/wiki/Madsoul?oldid=82022"
Community content is available under CC-BY-SA unless otherwise noted.