The Land of Departure is a peaceful, quiet world. In it, many Keybladers and Masters work together to achieve peace in the universe and to master the Keyblade.

The Land is comprised of a normal planet, much like Earth, with a giant castle-like structure floating off into space. It is chained to the planet by chains on rocks. It is here that the Keybladers live away from the untamed world, choosing not to interfere with nature.

The grassy plains outside the castle. It is here many Masters-in-training go to train against the native beasts of the land. The land is overwhelmed with a population, so nothing is too serious when the Keybladers hunt.

The waterside is just that; a part of the plains that lead off into water.

Leading up to the castle, one has to climb a mountain. It is through this path one can take to get to the central structure.

This is the central room of the structure, inside the castle. It is a large room, and has three central thrones at the top, for the residing Keyblade Masters. Off to the side are rooms and passages for pupils and general living.

Upholstery of the Universe

After Laharl betrayed his allies and killed Ash Ketchum, Ceodore and a recently freed slave named Lexaln Siurt fled from Asteroid M. They flew to the Land of Departure. Tired of traveling and sadly resigning that Allen was out of reach, Ceodore decided to settle down on the world. Lexaln, having no other family or place to look towards at home, agrees.

Two years later, the two are hearty trainers. Lexaln, being younger then Ceodore, is tutored by Master Axen alongside Dante Saxon and Occidere Way. Ceodore is training with Eraqus and Xehanort.

Lexaln, Dante, and Occidere get a mission to destroy a new threat of Heartless on Baron.

Once Lexaln and friends clear Baron, they return to the Land of Departure, only to find that the Heartless are sweeping across the universe. They track the source and travel to the Netherworld to find out what is going on.

While they are gone, the Land of swarmed by heartless. The Keybladers fight them off, but most of their forces are demolished, including Master Axen. Lexaln and his group return, unable to save their master, and Eraqus banishes them in anger. He closes the Land from all outsiders and starts to rebuild. 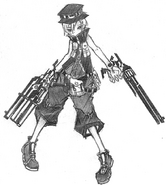 Dante Saxon
Add a photo to this gallery

Retrieved from "https://kingdomheartsfanon.fandom.com/wiki/Land_of_Departure_(Awakening)?oldid=72071"
Community content is available under CC-BY-SA unless otherwise noted.