Kuzco's Empire is a world which appears in Kingdom Hearts: Signs of Zodiac. It is the first world visited in the adventure of the heroes. And also the first world of which the Sign of Zodiac is collected. The ruler of this world is Kuzco although he doesn't know of the existence of other worlds, casuing no one else to know about it except for Yzma.

When you arrive in the world you find youself at Pacha's House which is at the top of the mountain. The place looks out of the whole village and Kuzcopolis can be seen in the distance. Pacha's House cannot be entered but there is a Safe Point there. When heading down you go to the Grassland Trail which is basically the village of the farmers. It is a large area which goes downwards. Many cottages are seen when going downwards. When you reach the end you are in the Llama Fields which is a small area with a small river streaming through it, which can be crossed by taking the bridge.

You then head into the Deep Forest which is a big forest with many paths which can be confusing because you can't see anything through the trees. When you make it out of the Deep Forest you arrive at the Café Entrance which just is an open spot in the forest. From there you can enter the Café which has a saving point. When going further you go to the Swamp which is a more open area than the Deep Forest. It however is much darker, has many puddles and lakes, lily pads, stones and other things. When continuing you arrive at the Wrinkly Bridge which is a small bridge that leads to the Black City.

The Black City is a boring standard city out of gray buildings. It is very dark in the building. Some of the paths are blocked by broken stalls. There are some small stairs that go upwards or downwards. But it eventually leads to the Palace Gates which is a long path that leads to the Throne Room of the palace. Right of the Throne Room is a small side way from which you can enter Yzma's Lab. It is a purple area with a few bookcases, cases with potions and a lab table. The lab has an elevator that goes to the Castle Head where you battle Yzma. If you go left in the Throne Room you go to the Royal Bedroom where Kuzco's masterbed is located. 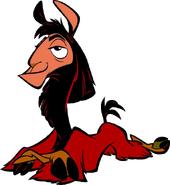 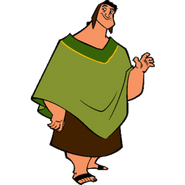 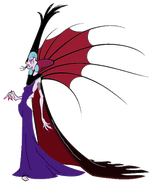 Kronk
Add a photo to this gallery

The Lab Rollercoaster can be played if you enter Yzma's Lab from the Throne Room. You have to finish it in the quickest time collecting the munny on the way. You can buck and jump in the cart.

Retrieved from "https://kingdomheartsfanon.fandom.com/wiki/Kuzco%27s_Empire_(KH:SoZ)?oldid=76491"
Community content is available under CC-BY-SA unless otherwise noted.