Sune, wearing the Black Coat, is seen walking along a long road through grassy plains. He was then stopped by three roads, the road to light, darkness and dawn. After thinking it through, he chose to take the road to light. The road led him to a forest where he was attacked by Neoshadows. Sune summoned his Keyblade and fought the Heartless. After he defeated all of them, a man in a Black Coat appeared. Sune attacked the man, but the attack had no effect. The man then disappeared in thin air and reappears at Sune's back. He then attacked Sune by an orb of darkness. After Sune was hit, he lost consciousness. So the man took Sune and brought and left him to the town nearby. Sune then woke up, remembering nothing but his name, in a room. There he met a girl named Nanaly and Keldric. 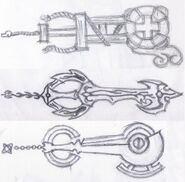 Retrieved from "https://kingdomheartsfanon.fandom.com/wiki/Kingdom_Hearts_Symphony_of_Memories?oldid=84385"
Community content is available under CC-BY-SA unless otherwise noted.