This article, Kairi (KH:FR), is the creative property of Kiarichan.

Kairi is a main and playable character in Kingdom Hearts: Foul Remembrance.

Kairi has electric purple eyes and semi-pale skin. Her hair is red and shoulder-length. She wears a pink dress covered in silver zippers that comes to her upper-theigh. A black strap is at her waist. The strap has another black strap that is attatched in the front and back, making it ark. A white dress that looks just like Namine's old dress is seen at the top of her dress. A black hood is attatched right where the strap from the white dress is. A necklace with a black string and an amber pendant hangs on her neck. On her right wrist is a bracelet that is made from a swath of white and blue fabric and a white string. Her shoes are tennis shoe-like pink shoes that come the mid-calf. The laces and soles are black. The laces come off of the shoes and tie around her leg.

She is a very happy and smart person, and will always cheer her friends up when they're down. She also has a strong sense of justice and loyalty.

When the story first starts, she is one of the playable characters as well as a party member. She is the one who decided to take Xid back to the Gummi Ship. After falling asleep from taking care of her, she confronted her at The Hideout.

She is barely featured in this story, but her and Riku's daughter, Hana, is one of the main characters.

The only weapons she can weild are keyblades 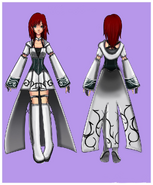 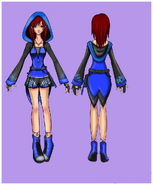 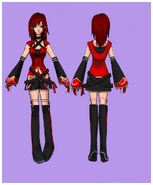 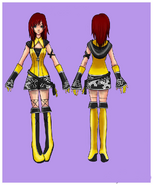 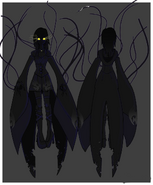 Her starting Master Form
Add a photo to this gallery

Retrieved from "https://kingdomheartsfanon.fandom.com/wiki/Kairi_(KH:FR)?oldid=85781"
Community content is available under CC-BY-SA unless otherwise noted.