Kage-shin are the highest evolved form of a Heartless and Nobody merge into one, but unlike what many believed would regain their original selves, is in fact a final stage of their evolution. Some believe they are far mroe advanced and more powerful as a Keyblade Master. However it was said to be unheard of and thought to be impossible for such creatures to evolve further and believed to have been 'extinct' since the last war which was centuries ago.

The first group of Kage-Shin were created by Valdrann, the primordial spirit of darkness using the corrupted hearts and transforming them into what would be known as Heartless to serve him as his growing army to expand his dominion on the countless worlds to over throw Kingdom Hearts and his light counter part Aeon. The Heartless would eventually grow stronger, and evolve into the Kage-Shin. The strongest among them were chosen to become his Acolytes, each given a command of their own armies of the Eternal Dark Empire; Rohak, Xanobass, Maleficent and Karas who proved themselves to the Shadow Emperor and obeyed his commands. However, two of the original Acolytes had their own agender: Maleficent, wanting to build her own empire and someday to overthrow Valdrann. Karas, turned against his own kind and joined forces with the Keyblade Masters to defeat Valdrann.

After the Shadow Emperor's defeat along with his Kage-Shin armies at the hands of his enemies, the Heartless could no longer pose a threat without their master or able to maintain their corporeal forms, until the time being.

Although many believed by then the Kage-Shin to be no more then extinct or a myth, but majority of those including the Keyblade masters still believe some of them survived and hiding, waiting for their master to return.

The Kage-Shin are the result of a Heartless and Nobody merge into one being. They come in varied forms of appearances; shape, form and size. Although they would regain most of their natural selfs once sealing their true forms inside their weapons. Meaning not all are exactly human apart from gaining abilities in their higher forms, even those similiar to others, most likely the Organization XIII and Keybladers.

Should a Kage-Shin 'die', both their heart and soul are cleansed from the darkness and return to their normal selfs or reincarnate into the next life depending if they were consumed by darkness or use of powerful magic. The existence of the Kage-Shin is permantly erased but possibly part of themselves can be inherited into their original selfs or into the child.

Kage-Shin appear to show some sense of prejudice towards Nobodies like the members of Organization XIII, giving a slang term 'Shells' as the meaning of a nobody being a shell of one's former self.

If a Nobody consumes the energy form their victims they slowly become stronger and eventually enter a feral-state by attacking other Nobodies to consume theirs, they simply shed their 'skin' and grew into giant humanoids known as Behemoths. Though they are towering beings, mostly weak and obediently follow commands only to Kage-Shin or other higher classes. But the Behemoths are very unpredictable and are incredible strong, after the transformation they begin developing an intelligence from learning their experiences and learn to fight better despite their enormous size, and when they begin to attack, the Behemoths become incredibly fast, agile and fire a powerful energy beam from their hands. It's discovered that Behemoths have this instinct of attacking Keybladers they encounter, even have a sense of the Keyblade's location if summoned.

Through the transformation of the Primal forms (or mostly referred as Primal Kage-Shin), a previous stage before evolving into a fully formed Kage-Shin. They are not as powerful as the Kage-Shin, but as they now have basic intelligence and the ability to speak, they basically take the roles of commanding the weaker heartless and Nobodies in the Dark Empire, gaining dominance of the lower classes. However they still retain the instinct to hunt and devour hearts which makes dangerous and unpredictable at times.

Like Keybladers, the Kage-shin have a multitude of combat skills and abilities, some of which are also similiar to the late members of the Organization XIII and variations of darkness creatures, mainly from Heartless and Nobodies they evolved from. It is speculated that they developed traits and abilities from other races from which they derived or gain from when they were either a Heartless/Nobody or as a Primal to reach a higher level of their evolution.

There are many who have yet to have evolved completed forms, the Kage-Shin in their in primal state of evolution are still powerful enough to possess intelligence and control Heartless and Nobodies. 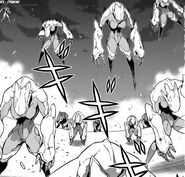 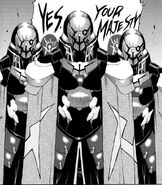 early attempt experiment
Add a photo to this gallery

Retrieved from "https://kingdomheartsfanon.fandom.com/wiki/Kage-Shin?oldid=103314"
Community content is available under CC-BY-SA unless otherwise noted.