"Being stupid is what I've led to believe you ants Are when you think this goes beyond simple revenge or hoax, but it still comes down to power"

Hopper is the primary ruling villain of Ant Island in Kingdom Hearts Pixar.

He controls the legions of heartless and army of grasshoppers who once collected the bounty of provisions of the Ant Island Colony led by Princess Atta and her elderly mother ant.

Hopper was part of the council of world villainy assembled by Maleficent in the Forgotten Realm and was bestowed the ability to control the heartless, nobodies and unversed of his realm.

He was also in secret dealings Organization XII and it's one special member.

Hopper appeared as the central antagonist boss of the world and upon defeat was devoured by the Bird of the Chasm.

Hopper is the leader of the thieving Grasshoppers who vowed to protect the Ant Colony of Ant Island in exchange for the food they gather for the winter.

Hopper is a cruel, impatient, and ruthless bug who relies on the notion of power rather then hunger when it comes to the thieving of the Ant Colony.

Hopper is ultimately resourceful and has a strong resentment for his brother who he swore to his dying mother he would not bear harm.

Hopper discovered Sora, Donald, and Goofy and saw them as a potential threat upon them standing up for Flik.

Hopper then ordered his legion of most fearless grasshoppers to eliminate the trio unaware he was the keyblade wielder.

Being an associate of Maleficent's council he was informed about Sora and upon discovering it was him unleashed his heartless.

Flik was then sent out for his trouble on a false mission to find warrior bugs willing to come back and defend them from the soon to return grasshoppers.

Hopper sent many heartless out to bug city learning Sora, Donald, and Goofy were accompanying Flik there.

Sora and the others however returned with willing circus bugs and pulled an elaborate scheme against the fast coming Hopper.

Hopper however discovered this plot and found there to be no food available deciding to squish the queen and call upon Maleficent to collect Princess Atta.

Hopper's search for the keyhole however was then interfered by a large fake bird upon Sora's return with the circus bugs and Flik.

Sora, Francis, Flik, Slim, Heimlich, Donald, and Goofy then confronted Hopper in the thorns overseeing the great chasm for a final confrontation.

Hopper was defeated and then devoured by the bird of the chasm creating the ultimate giant heartless.

The heartless was destroyed and along with it the heart of Hopper the Grasshopper.

Once there Sora and the others underwent an insect transformation and befriended the hapless ant inventor Flik.

Flik ended up causing along with Sora and the others the loss of the food for a controlling group of grasshoppers.

As the colony hid the grasshoppers discovered the loss of food and attacked the colony.

Sora, Donald, Flik and Goofy defended until they were overpowered by the heartless and Hopper left his threat unless they regathered food.

Princess Atta and the council then ordered Flik, Sora, Donald, and Goofy on a false mission to find warrior bugs to defend them upon Flik's insistence.

The group set off but were soon discovered by Hopper who set it's heartless on their trail.

The group then discovered circus bugs who were mistaken to be warriors.

The circus insects were then brought back to Ant Island and forced to fight.

However Flik, Sora, Donald, and Goofy learned of their true identities and positions and were forced to build a decoy bird to scare away Hopper.

Hopper then returned finding them to have collected no food and Sora, Flik, and the others banished.

Atta's sister Dot had overheard grasshoppers mentioning Hopper's plan of eliminating the queen to teach them a lesson and convinced the heroes to return.

Hopper then was partially scared by the decoy bird but soon learned of it being fake and attacked.

Sora, Flik, Donald, Goofy, and many other circus insects defeated Hopper and watched his demise at the hands of the real giant bird nesting in the nearby chasm.

Hopper's devouring led to the heartless possession of the bird and the final fight.

The final battle resulted in the destruction of Hopper's Heart, discovery of the keyhole and learning that Princess Atta had been kidnapped by Maleficent.

He is of ample build and displays a bristle skin structure showing his imperiousness.

Hopper attacks aggressive and quickly making him a difficult opponent.

Counter-Attacks and swift forms prove helpful along with the dizziness caused by his strongest attacks.

Hopper also possesses a shield upon his wings and takes mid-air flight through many of the battle unless his wings are destroyed.

Hopper's plan in Kingdom Hearts Pixar is very similar to that of the film apart from being devoid of any heartless.

Hopper commands the grasshopper colony to terrorize the ant colony of Ant Island so that they provide them with food.

Hopper made a deal with the ants that they would get protection from other harmful creatures should they provide with food.

Hopper's intentions have nothing to do with hunger however but rather with power.

Upon discovering the food the be lost due to Flik's mistake he threatened that if they recapture it before the next leaf falls he would eliminate them.

Flik then with Circus bugs and the colony decided rather ti build a bird decoy to scare away Hopper but failed when he realized what they had done.

Hopper then came into a confrontation with Flik and was devoured by the actual large bird from the chasm mistaking him to be another fake.

Hopper was fed to the three hatchlings of the large bird during the rainy storm upon Ant Island.

Hopper's announcment of return to Ant Island for the keyhole

Hopper tells of his newfound power 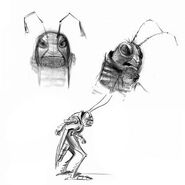 Early Sketches of Hopper
Add a photo to this gallery

Retrieved from "https://kingdomheartsfanon.fandom.com/wiki/Hopper_(KHP)?oldid=94249"
Community content is available under CC-BY-SA unless otherwise noted.