Godzillazord is the Dinozord of Water piloted by Tommy Oliver (Green Ranger). He was originally known as Dragonzord (守護獣ドラゴンシーザー, Shugojū Doragon Shīzā, "Guardian Beast Dragon Ceaser") in Mighty Morphin Power Rangers. As Alvin uses the Watergleam Gem to summon him, either Brittany or any other party member of yours join in the battlefield.

When Godzillazord is summoned with the power of the Watergleam Gem and the Zilla Dagger's summoning melody played, he emerges from San Fransokyo Bay. Sometimes his superb combat ability matches that of Tyrannosaurus Dinozord. He has a strong drill on his tail, fires Zilla Lasers (ジラハーレー, Jira Hārē, "Zilla Hurley") from his fingertips and fires his Zilla Fire (Jira Faiya) from his mouth, both attacks are powerful enough to smash giant monsters and enemies. Godzillazord can combine with Mammoth, Triceratops, Sabertooth Tiger, and Pteranodon Dinozords to become Megadzillazord. 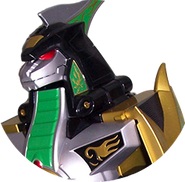 Add a photo to this gallery
Retrieved from "https://kingdomheartsfanon.fandom.com/wiki/Godzillazord?oldid=93592"
Community content is available under CC-BY-SA unless otherwise noted.