The Four Maidens Of Heart (スリー・メイドンズ・オブ・ハート3 乙女) are maidens with hearts of pure light, devoid of darkness. They are the original three maidens of the universe to whose hearts are born naturally free of darkness.

They were the original Princesses Of Heart way before the time of the Heartless, Nobodies and Unversed but of the time of the Abominations and their reign of darkness and terror upon the worlds which ultimatley swallowed all the worlds in darkness until the Four Maidens shattered half the light in their hearts to pass it onto coming children who rebuilt the worlds.

The children were to be the Seven Princesses of Heart as coincedentally the light seperated from the original Maidens Of Heart became that of seven girls.

The Four Maidens of Heart came following the Keyblade War and were created as the universe was rebuilt for the first time thanks to the lights of surviving children.

The lights then came to four newly born maidens who encompassed the light fully in their hearts and came to be the Four Maidens Of Heart who were the original first way to forge the X-Blade to open Kingdom Hearts and forge the Door to Darkness.

The Four Maidens of Heart were:

The Four Maidens of Heart appear in Kingdom Hearts: 0 as a significant sub-plot against the abduction of Keyblade Master Helena by Xehanort's Abomination replica Eulo.

The Four Maidens Of Heart possess hearts of pure light which when harvested in the correct ritual way can forge the X-Blade the only thing which can unlock Kingdom Hearts.

He however becomes worried as to the success of the plan with Xehanort's bestfriend Keyblade Wielders Saiiaden and Eraqus interfering and trying to stop Xehanort knowing him crossing keyblades with Eulo will forge the X-Blade.

So Eulo halfway through the game's story has his four Abomination Generals abduct the Four Maidens Of Heart and creates four sleeping pods for the Maidens to be placed in whilest he extracts their hearts at the Keyblade Graveyard and forges the X-Blade.

He however ultimatley does not extract the Four Maidens' hearts as Xehanort comes to the Keyblade Graveyard and does battle with him forging the X-Blade.

Despite the fact none of the Four Maidens appear in Birth by Sleep the following game story after Kingdom Hearts: 0 the timeline follows that the worlds have been rebuilt through the hearts of children as the world's were swallowed by the darkness of the Abominations.

In the re-construction the Four Maidens all shattered half of the pure light within their hearts and cast it out for someone or some others to inherit.

Half the light of Pocahontas seperates into another two halves and they join with Princess Aurora of Enchanted Dominion, Alice of Wonderland and Jasmine of Agrabah.

Half the light of Mulan comes to the Princess Belle of Beast's Castle.

Half the light of Anastasia becomes three fractions and comes to the Princesses Snow White of Dwarf Woodlands and Kairi of Radiant Garden.

Half the light of Ariel comes to the girl Cinderella of Castle of Dreams.

Maiden of Heart Ariel of the world Atlantica appears in Kingdom Hearts I in which she befriends Keyblade Wielder Sora and his Disney Castle companions Donald Duck and Goofy.

Maiden Ariel appears again in Chain Of Memories with her world.

Maiden Mulan and her world Land of the Dragons appears in Kingdom Hearts II where she is befriended and helped by Sora, Donald Duck and Goofy

By assembling all Four of the Maidens of Heart and placing them within Sleeping Pods and by making use of a Keyblade of Heart their hearts can be extracted and emanate from their bodies sprouting out an energy which entertwines with each other and forges the X-Blade and the Door to Darkness. 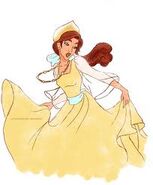 Ariel
Add a photo to this gallery
Retrieved from "https://kingdomheartsfanon.fandom.com/wiki/Four_Maidens_Of_Heart?oldid=65287"
Community content is available under CC-BY-SA unless otherwise noted.