Sora, the Keyblade's chosen, stumbled upon an ancient darkness, and accidentally unleashed it. With a will of its own, it possessed the body of our hero.
•
Now under the influence of the darkness, Sora began to wreak havoc upon the worlds, summoning Heartless to run rampant and conquer them. All those who dared to resist him were defeated without mercy.
•
Sora's long-time friend, Riku, took notice to the corrupted worlds and the damage it caused.
•
Knowing he could not face him on his own, he looked into his heart for the answer. There, he found a special light — one that transcends dimensions.
•
From this light, Riku summoned ten heroes to help vanquish the darkness. They fought many battles, and even helped reclaim some of the worlds.
•
But of course, the darkness within Sora took notice, and he too looked into his heart...
•
From it, he reanimated ten villains; ten villains destined to destroy the ten heroes, and aide him in his conquest...
•
...and the battle of a lifetime was on. 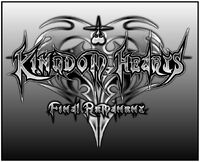