Flintlass, formally known as Hiuchiishi no Otome, is a main protagonist in Kingdom Hearts: Arcana. She is the spirit of Nathaniel Koroshiya's Zanpakutō.

While not initially seen, Flintlass was born as Nathaniel's inert Zanpakutō spirit within her Inner World. As time wore on, she slowly began to awake. As Nathaniel progressed through the Soul Reaper Academy, he became aware of her prescence as she often pulled him into her Inner World as he slept. Whenever Nathaniel would ask for her name, Flintlass would tease him and refuse to tell him. Eventually, one year before Nathaniel's graduation, Flintlass attempts to seduce him within the Inner World. Despite being confused by her proposition, Nathaniel falls for it, as she leads him to a large bed inside the World's ship. She proceeds to make out with him, and in the midst of it all, she whispers her name into his ear. Minutes later, she sends him back to the real world, wondering how this would all play out.

As Nathaniel passed through the Corridor of Darkness, Flintlass felt a strange sensation resonate throughout her entire being. She dismissed it as nothing and walked to the ship. Upon entering her room, the feeling intensifies, and Flintlass collapses before reaching the bed. A little disoriented, she pulls herself up onto the bed and sits up with her legs spread out to the side and holds herself for reassurance. Suddenly it becomes cold; Flintlass was able to see her breath as she shivered and rubbed her arms for warmth. Looking outside, she saw the clouds in the sky thicken and darken, blotting out the overbearing sun and bright blue sky. The feeling and disorientation returns, as Flintlass falls back onto the bed, finding herself immobilized by an unknown force as she breathes heavily. She frantically, but slowly, looks around the room, as she passes out.

An unknown amount of time passes as she wakes up, not on her bed, but on a stained glass platform, with not only her face, but Nathaniel's as well. They both seem to be asleep. She finds the strength to stand again, and looks around. She finds Nathaniel standing directly opposite her. She is immediately surprised to see him, as Nathaniel mistakes the platform surrounded by darkness as a corrupted form of the Inner World. A mysterious voice immediately denies the possibility, and states that the area he is in is his heart. Seconds pass and the voice lightly laughs. It goes on to explain that they are "on the same page", and that they will be rewarded. The Court Guard appears in his hand, and Flint's Maiden appears in Flintlass's. The weapon's sudden appearance catches Flintlass off guard for a second, before studying the weapon's interesting design. Before she can continue, a hole appears in the darkness, and out comes a Darkside/Menos Grande-like hybrid, which Nathaniel and Flintlass immediately fight with their Keyblades. Upon defeat, the hybrid melts into darkness, coating the stained-glass platform. Suddenly, the platform shakes, then tips to Flintlass's side, as she tries to stay standing. Nathaniel jumps toward her, his arms wrapping around her body. Flintlass was surprised by Nathaniel's sudden action, and slightly confused, as she forgets about keeping her footing and slips down the pillar's surface. She smiles, grateful for Nathaniel's kindness, and returns the embrace as the two fall into the darkness. Flintlass slowly closes her eyes.

Flintlass bears a striking resemblance to Nelliel Tu Odelschwanck, with sand colored hair and red eyes. She wears a charcoal grey tanktop with a triangular cutout at the bottom, framing her navel. On top she wears a small, open rust brown vest that reaches just to her ribcage, and a short skirt of the same color, as well as blood red heeled boots. She is often seen wearing a tricornered pirate hat with a deep red lining and golden trim.

Flintlass, while harsh, unyielding and unfeeling for the proper situations, can be likeable and social most of the time. Due to her "World-locking" in the Inner World, she always talks about having "just a little bit of excitement." Unlike any other Zanpakutō, Flintlass has a unique relationship with her Soul Reaper counterpart; interestingly enough, she is in love with Nathaniel, as he is with her. With Zane, Flintlass displays her motherly instincts, as seen in his first days of becoming a Soul Reaper. With Nathaniel, she can be quite seductive.

Immense Spiritual Power: As the Zanpakutō of a Captain class Soul Reaper, Flintlass herself has a considerable amount of spiritual energy. Just like Nathaniel's, hers fluctuates from red to green.

Master Swordsmanship Specialist: Being a Zanpakutō herself, Flintlass can effortlessly wield her sealed and Shikai form.

Spiritual Autonomy: Due to gaining the possession of a Keyblade, Flintlass has the ability to separate herself from Nathaniel on a whim and act on her own.

At any time, Flintlass is able to manifest the sealed sword form of her former self. This is a standard katana with a silver guard that curves around her hand similar to a cutlass' and a hilt with blood red stitching. Halfway down the blade is a three inch long gap that has no sharp edge, and curves on the inside. A pair of red tassels hang from the end of the hilt.

Shikai Special Ability: Ichigeki Hissatsu (一撃必殺, One Shot One Kill), named after the four character idiom of the same name. To perform it, Flintlass pulls the hammer of the pistol back and fills the pistol with spiritual energy, to the point where its golden edges glow a faint green. She shouts "Ichigeki Hissatsu!" and pulls the trigger, releasing the energy. When fired, the attack launches a wide angled green stream of spiritual energy, adorned by thin blue lightning bolts alongside it. The attack's name is an oxymoron to the attack itself, as it has the potential to kill more than one person in the attack's vicinity. The shot itself can be compressed into a smaller stream, making it more powerful and destructive than its wide-range equivalent.

Jū Rensha (銃連射, Hail of Bullets): This ability can only be used in Hiuchiishi no Otome's dual pistol form. Flintlass fires a steady stream of compact reishi bullets at a comparable speed to Findor Carias' Bala.

Bankai Special Ability: Flintlass can merge six of the swords together to form a slightly enlargened version of Hiuchiishi no Otome's Shikai; the stock gains a more obtuse angle and extends down his forearm, the barrel becomes taller and narrower and extends to the tip of the sword, which also becomes longer and thinner and loses the guard. The matchlock mechanism is replaced with a slot which fits the guard of the swords on Nathaniel's back. 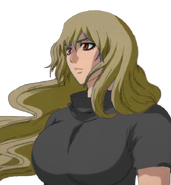 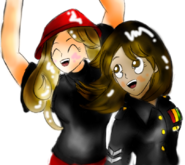 Retrieved from "https://kingdomheartsfanon.fandom.com/wiki/Flintlass?oldid=68563"
Community content is available under CC-BY-SA unless otherwise noted.