"Hey look buddy, I'm an engineer; that means I solve problems. Not problems like 'What is beauty?', because that would fall within the purview of your conundrums of philosophy. I solve practical problems."
—Engineer

The Engineer is a character set to appear in Kingdom Hearts: Arcana. He appears in Dustbowl and originally made his debut in Valve's Team Fortress 2.

Befitting his name, the Engineer dons a yellow-orange construction helmet and welder's goggles. On top of a pullover shirt (which is either red or blue, depending on the team he plays for) sporting the Engineer's wrench insignia, he wears brown overalls outfitted with various pockets and pouches and iron-cast knee pads. He has a yellow and grey welder's glove on his right hand, and wears tan worker's boots.

The Engineer is a soft-spoken, amiable Texan with a knack for all things mechanical. He loves barbecue, guns, and higher education. He prefers to build and maintain devices that benefit the team rather than engage in much direct combat, which often ends in him sitting back with his guitar while his Sentries do the fighting.

The Engineer has three weapons to his disposal;

However, the main feature of the Engineer's arsenal is the Buildings; machines the Engineer can build, each with their own unique function. 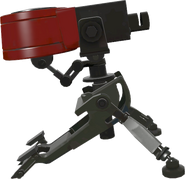 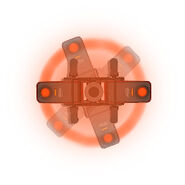 A Teleporter.
Add a photo to this gallery
Retrieved from "https://kingdomheartsfanon.fandom.com/wiki/Engineer?oldid=47617"
Community content is available under CC-BY-SA unless otherwise noted.