Dino Ultrazord is the combination of Dino Megadzillazord and Titanus the Carrierzord. He is made up of the Seven Guardians of Light, the Dinozords, he is the mightiest of all their combinations. He originated in Mighty Morphin Power Rangers. 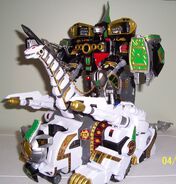 Add a photo to this gallery
Retrieved from "https://kingdomheartsfanon.fandom.com/wiki/Dino_Ultrazord?oldid=91145"
Community content is available under CC-BY-SA unless otherwise noted.