Destiny Islands, named Destiny Island in Kingdom Hearts II, is a world from the Kingdom Hearts series. It is the home world of Sora, Riku, Yukio and Master Xehanort. The world seems to be led by an unnamed mayor, who is mentioned as Kairi's foster father.

The world appears as a playable world, which can be visited at any time, in Kingdom Hearts: Signs of Zodiac. The Main Island is also a playable area now. Sora and Kairi have settled down here at their 45 year old age and take care of their daughter. Yukio, Sora and Kairi's, son also lives here in his own appartment. Characters like Tidus, Selphie and Wakka also still live here and also have grown.

When you arrive at the world you find yourself at the Beach which has a little dock on it that leads to the Small Island. When you leave the beach towards the town you first find yourself in the Suburbs. The Suburbs is a big area that slowly ascends and has single houses standing there. This is also where Sora, Kairi, Riku and others live. When you head east from this area you'll go to the Village Hills which goes upwards and leads to the Cactus Top. The Cactus Top is filled with many cactus's, which also can be seen on the Village Hills already. Cactuar can be found here hiding between the cactus's and can be challenged to races around the island.

When you head north from the Suburbs you'll find yourself at the City Square which basically is a round area with some few appartments. West of the City Square are the School Grounds where the island's school is located. East of the City Square is the Market which has several stalls surrounded by normal shops. North of the City Sqaure is the City Hall which only contains the city hall and a garden. Kairi's adoptive father still is the mayor.

When you take the boat to the Small Island you'll arrive at the Seashore. Everything is exactly the same as it appears in the first Kingdom Hearts. It has the Seaside Shack which leades to the Cove and from the Seashore you can enter the Secret Place. 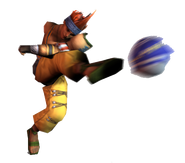 Yogurt and Cherry
Add a photo to this gallery

When you go to the Cactus Top you can spot Cactuar between the other cactus's. When you speak to him he wants to race you. There are five races to beat him in. But to challenge him, you have to give him Cactus Juice which can be found in various worlds. When you beat him at all races you'll receive him as a summon, and receive the 1000 Needles keyblade.

Retrieved from "https://kingdomheartsfanon.fandom.com/wiki/Destiny_Islands_(KH:SoZ)?oldid=102724"
Community content is available under CC-BY-SA unless otherwise noted.