This article, Court Guard, is the creative property of maggosh.

Court Guard is Nathaniel Koroshiya's main Keyblade, used alongside the Flint's Maiden Keyblade in Kingdom Hearts: Arcana. It is also the staple Keyblade of the Kingdom Guard.

The shaft of the Court Guard resembles the Penitence Tower in Seireitei, slightly pointed at the top. The teeth take the form of the Japanese number 13 (十三). The hilt resembles the Gotei 13 rhombus, and the keychain, made with rhombus shaped links, ends in a token taking the form of the symbol of the Onmitsukidō. It is named after the 13 Court Guard Squads, of which Nathaniel is a Captain. The Onmitsukidō token also represents the time he spent under the command of Yoruichi Shihōin, who was head of it prior. 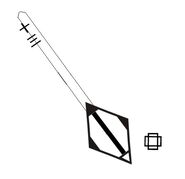 Retrieved from "https://kingdomheartsfanon.fandom.com/wiki/Court_Guard?oldid=49114"
Community content is available under CC-BY-SA unless otherwise noted.