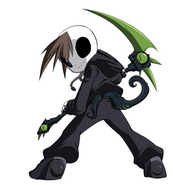 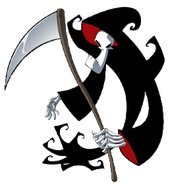 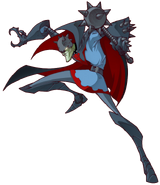 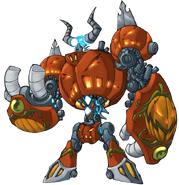 Pumpkinator
Add a photo to this gallery

Kaito wears a black suit similar to a vampire just like his father. His hands also have white gloves that are typical to Disney characters. He has skeletal bat wings on his back and wears a pumpkin mask on the right side of his face. His face is blackened so as to blend into the gothic atmosphere.

Kasumi wears a gothic witch suit. She wears long black arm gloves (without the hands covered). She wears a black mage hat but then in black. She wears a black top with a v-hals that has strings crossed over it, she has a short ribbeling skirt and a brown belt. She has long white-black striped socks and black leather boots.

Daichi transforms into a demon. His eyes now glow chemical green, and his hair is more messy. He wears a long black coat with 13 knives stabbed in his back. There also is a scar beneath his left-eye and tentacles can be seen under his coat. His other clothes stay the same only with a darker tint.

Raito transforms into a devil. His skin turn whole red and two horns appear out of his head. He wears a white boa with a red santa-like costume. He also wears a giant black boots.

Retrieved from "https://kingdomheartsfanon.fandom.com/wiki/Castle_Evergrim_(KHA)?oldid=67486"
Community content is available under CC-BY-SA unless otherwise noted.