He resides in the suburbs of Morcia City (cut off from the big city life), on a world called Avastar. He lived there until he learned of his true nature and mysterious past, and then wreaks havoc to his neighborhood, leaving afterwords.

Bradley Miller was born in a small, unnamed village. For his entire childhood, he was always told that he was "special". Bradley never quite understanding the meaning of it. When Bradley was about the age of seven, the government group called EAGLE raided and massacred the town, searching for possible candidates to host the Gaia SIN cells. Bradley was one of these people. EAGLE was targeting young children with faster developing immunities, and Bradley was at the top of the list. After several more subjects died, Bradley was taken in, and his body was fused with the Gaia SIN cells. His body tried to reject the foreign invader, but in the end accepted the cells in a bid to survive. Out of thousands of subjects tested with the cells, including men, women, and children, Bradley was thought to be the only survivor.

After a year of tests, Bradley, with the aide of a young girl, escaped the lab where he was being held, and went on the run with her. Eventually, they ended up split up, and Bradley was found by an orphanage in Morcia City. They took him in and raised him for his entire school career, and Bradley would have no memories of the traumatic events that occurred beforehand.

Bradley was a young genius during these years. He excelled in all of his subjects, especially science. He was good - perfect - at everything, much to the displeasure of his classmates. On a field trip to a science convention one day, his classmates bullied him, by beating him and calling him names. Barely anyone attempted to cease the bullying, and it was after about six minutes that a teacher finally noticed it and broke it up. Enraged at the way he was treated, Bradley wished to take revenge, and punish all of the students that bullied him, did nothing to help him, and the teachers who were so oblivious to the actions of their students. Mere moments afterward, the bus lost control and crashed, brutally killing every single person on board and a man driving home from the store with his wife. Only Bradley and this man's wife survived. After this crash, this woman would become stricken with grief, and ignore her nine-year old son for years.

It was the fact that what he wished for came true, and that he survived such an amazing accident, that got Bradley believing he was "special". The feeling of this brought back long lost memories of his childhood, when his parents told him the same thing. In confusion of his true past, Bradley dove into the pursuit of knowledge in an attempt to stumble upon his true origins, and find out how "special" he really is.

Over time, Bradley's achievements and research caught the attention of an enigmatic man named Raskade. Seeing much potential in the youth, Raskade manipulated Bradley into becoming his apprentice, and began teaching him and successfully coaxing him down the path to darkness. Down this path, Bradley gained insight upon unstudied and never before heard of concepts and theories, such as the idea of the Body, Mind, and Soul, and the less important Heart. This eventually led to his creation of the Mind Extractor, a device Bradley hypothesized could forcefully tear a person's Mind from their body, and create a sentient being known as a "Mindling". It took many years to develop this machine, and when it was finally complete, his hypothesis proved correct.

Over time, Bradley grew to be trusted by Raskade, and Raskade let Bradley in upon his master plan, which Bradley willfully chose to help Raskade achieve. Raskade even educated Bradley of the Gaia SIN cells, and the powers they possessed, speaking of them as a blessing, not a virus that was slowly eating away at his body. Bradley accepted the notion without question, always knowing that he was "special". Raskade also told him the downsides - that he would have to find a way to renew his body in order to survive.

While studying the mechanics of a Heart, Bradley took notice to the strength of a particular one: that of Owen Stevens. He contemplated over the light within it, and soon understood that Owen had the potential to wield an ancient weapon known as the Keyblade. Feeling that this weapon could be of great use to Raskade's plan, he presented the idea to use the Keyblade as a part of his Raskade's plan, which Raskade, noting the simple brilliance of the idea, agreed to carry out. Bradley hypothesized that if Owen's darkness were extracted, or at least partially extracted, the strong light within Owen would react and manifest as the Keyblade as a counter-offense. When Bradley, after kidnapping Owen and preforming several tests on him, successfully extracted Owen's darkness, his hypothesis proved incorrect, and he released the now darkness purged Owen.

The darkness left over, meanwhile, produced a very peculiar being. Owen's darkness manifested itself into a condensed cloud of gaseous darkness. The being intrigued Bradley, and he locked it away and began preforming tests and experiments upon it. It was, in its entirety, a sentient being, one that paralleled Owen, thus presumably having access to the Keyblade. Bradley began strengthening this being, and feeding it will, so as it can become truly sentiment and form a physical body, capable of wielding the Keyblade. He succeeds in giving the being a mind of its own, but does not succeed in giving it a body. Deeming the experiment a failure, Bradley locked the gaseous darkness away, and abandoned it. This darkness would become enraged with its abandonment, and would plot revenge against Bradley, so as he could understand his suffering.

However, his interest in beings created from darkness was not extinguished. He began researching beings known as "Heartless", and found ways to synthesize them. He began creating new beings, experimenting with different breeds of existing Heartless and different cells. His experiments were successful, and he managed to create an entire race - an entire army - of beings he named "Hybrid Heartless".

Meanwhile, Bradley developed a close bond with Harold Payne, the two sharing an interest in inventing. The two where an impressive team, managing to invent several useful contraptions. The team managed to invent a variant of the Black Coat, and Bradley used Harold to complete his Mind Extractor device. Over time, Bradley began to favor Harold as a potential host, for when Bradley's body became to unstable to use (due to Gaia SIN frequently degrading his body). Bradley, having already gained Harold's trust, figured that, when the time comes, there would be know problem seizing the new body.

After successfully completing the Mind Extractor, and recently finishing the Black Coat project with Harold, Bradley decides to disappear and go into hiding. He distracts Harold by setting fire to a machine in their lab, and steals one of the Black Coats they were developing. That night, he released his army of Hybrid Heartless, allowing them to wreak havoc on the neighborhood he lived in, providing a diversion while he escaped the town. He planned to make it appear as though he died in the chaos. Unfortunately, he was spotted aiding the Heartless during his escape by Harold himself, ruining his plans to stay undetected.

Bradley is a tall young man, physically fit for his age. He has red-brown hair that parts on either side of his face as well as sticks out in that back similar to Riku. He wears a blue turtleneck sweatshirt, the same one Harold wears albeit having both sleeves, with a Black Cloak over it. He wears two straps across his chest, most likely to hold his sword. He wears baggy pants that are tucked into his boots, which are the same as Harold's.[2] 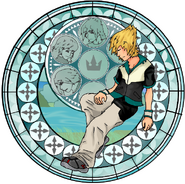 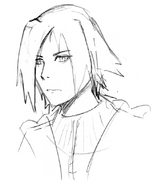 A mugshot of Bradley

"Hadley", corrupted, after the fight with Owen.

This article, Bradley Millar, is the creative property of LegoAlchemist.