The Kingdom of Baron is a world appearing in Kingdom Hearts: Awakening and is the home town of Ceodore, among others.

Baron comprises mostly of a castle and it's surrounding lands. It is a peaceful, prosperous place, filled with an abundance of natural resources. It has a parliamentary monarchy, and it's citizens are content.

The epicenter of Baron, it is here Allen first arrives. It is a huge castle, heavily guarded by Dark Knights. The king lives in the smack center, and a small town with the same name is slightly outside it's walls.

After confronting Golbez, Allen is teleported here. Far enough from the castle to not make it back (yet he can see the castle in the horizon, and this is still in the kingdom), he fights Golbez properly with King Cecil's son, Ceodore. After defeating him, they are transported to the Red Moon for a final confrontation.

A normal plain, there is also a forest in the far horizon, opposite Baron castle.

Here, Allen and Ceo fly up to the moon after Golbez retreats, and fight Golbez for the last time.

They crash inside the Red Moon. Inside it is an icy wasteland, and Golbez plans to use it's Keyhole to ram it into Earth and take control in the resulting chaos. It is a barren plain, and has no inhabitants.

This is the third world Allen joins. After being transported from the Netherworld with Laharl, he suddenly finds himself in the castle of Baron.

Darkness of the Truth

Allen first arrives in Baron after his Gummi Ship lands with Laharl. The two are slightly outside a huge royal castle. They travel through the plains and request to enter. After being checked by the guards of the castle, the two enter.

After venturing to the throne room (escorted by guards), the two meet King Cecil Harvey and his son, Prince Ceodore Harvey. King Cecil demands what this meeting for, and Allen tells him the story of how he lost his way and wants to return home. He states that the two came here in search of a mysterious, black cloaked man. King Cecil has no memory of hearing or meeting this man, and decides to ask King Mickey at Disney Town about it. As he gets ready to leave, a rumble is heard throughout the castle.

Guards go to investigate when a huge explosion is heard. Allen and Laharl go to investigate, and are stunned when they are attacked by monsters. The two attack, and try to defend the castle from being overtaken. Allen slowly gets outside, when he is helped by Prince Ceodore. The two attack, and along with the help of the militia and army of Baron, manage to get to the end of the wave. More appear, and Allen sees a man in dark armor and a cape. He chases after the man, thinking it is the same enigma he first found at his home. Ceodore follows.

The two, abandoning the castle attack, find the man - named Golbez and uncle of Ceodore - outside of a forest. They attack, getting no answers from the man. Golbez manages to defeat them, and stares up to the moon in a quickly coming night. Golbez starts to teleport, and Allen and Ceodore chase after him. They are close enough to be transported, and find themselves on the moon.[1]

After roaming the small cosmic rock, the two find Golbez again. Enraged and confused, Allen attacks him, simultaneously asking for answers about the enigma. Golbez speaks in riddles, only confusing and frustrating Allen more. The three enter battle in earnest, and after a long and hard battle, Golbez wins. As the two are pinned down, Golbez summons a giant meteor to strike the two down. As he begins to teleport away, Ceodore tackles him, Allen in hand. The two lay under Golbez' winded body as the meteor strikes, hurting only Golbez and destroying the moon.

As the planet crumbles and the three fall down to their doom, Golbez attempts to save himself by teleporting back to Baron's surface, unaware that the other two were clinging to his cape.

After the three land back on the planet, Allen strikes down Golbez, and he and Ceodore fall unconscious just as the last of the monsters unleashed upon the planet are destroyed.

Allen awakes the next morning, rested after a long battle. The castle and nearby town is in ruins, but is under reconstruction. Allen, Laharl, and Ceodore decide to check out Golbez in his cell, to possibly get some answers about the man. Just as they arrive, Golbez transports Allen to a completely new planet, collapsing afterwards. Confused and scared for their friend, Laharl and Ceodore use their Gummi Ship and fly off back to the Netherworld in search of Allen.

It is here that the story splits.

Upholstery of the Universe

Around 2 years after the events Allen took part in, Lexaln Siurt, Occidere Way, and Dante Saxon visit the world to rid the world of Heartless. They received a mission from their home in the Land of Departure.

After investigating the problem and defeating a few Shadows, the trio make it to the castle. They talk to King Cecil, and Lexaln thinks the place is familiar.

Besides this mystery, the King tells them that he has been grieving from the loss of his son around 2 years ago. The King says that his son ran off into space with another boy, and the two were never found again. Lexaln finds something wrong, but says nothing.

King Cecil says that the Heartless outbreak started just a few months ago. Before, a Heartless popped up occasionally, but never in this magnitude. The guards have their hands full with this. Occidere volunteers to return back to the Land of Departure and inform Master Axen about this, while Lexaln and Dante try to find the source of this.

So, they do. Lexaln and Dante fight an invasion of Heartless into the forest, and by the time they get there, it is pitch black. Once they get there, the two realize that a strange beam of light is leading from the forest to the moon...

They run into the forest, urgently. The two companions soon get to a clearing and see that the beam was indeed coming from there; the light was almost blinding. As the two start to circle the area, a huge Heartless falls from the beam. Lexaln and Dante prepare for battle and defeat the enemy. The beam of light dissipates, and the two fly back to the Land of Departure, satisfied that the threat had been eliminated. 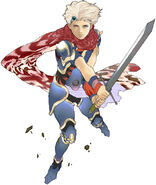 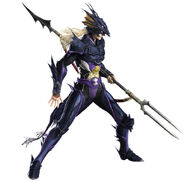 King Cecil
Add a photo to this gallery

Golbez
Add a photo to this gallery

The streets of Baron.

An inn inside Baron castle.

The landscape in the Red Moon.
Add a photo to this gallery

Retrieved from "https://kingdomheartsfanon.fandom.com/wiki/Baron_(Awakening)?oldid=72064"
Community content is available under CC-BY-SA unless otherwise noted.