This article, Ayano Katagiri, is the creative property of Malevolence Crystalised.

"Is it possible for a hero to always win even if he is in a near death situation? Let's find out."
—Ayano Katagiri

Ayano Katagiri is a recurring character from the Remnant: Change the World! series and a Major Character in Kingdom Hearts: The Final Remnant and a Special character in Kingdom Hearts Legacy. Ayano Katagiri was originally planned to be the Odin (God of All God) because of the idea recreating Malevolence with a different body (Human Body) she loses her ability but still can use a new version of her Geass which is The Neutral allowing her to toy with life.

Ayano Katagiri is newly created human, which got discovered by the Orginization XIII, at that time, she was recruted (This explains her cloak, However, it was modified because of relising the Real plan of the Orginization). She is later on their battle with Sora, she escapes because of her fear of Keybladers. After this she reaches Midgard, an area in Sonraia (an area in Remnant: Change the World!), She was discovered by the Midgard Trinity which where, Kyle Luminara, Naga and Angelus Saviour, discovering her orgin as member XV in the Orginization XIII, they decided to make Ayano Katagiri number XIII of the Holy Blade Order (at that time a protection squad of the Midgard). However, she leaves the Holy Blade Order (However, in the KH: Holy Blade Order, During the Rebellion of the Order, Malevolence never leaves) and works personally for The Midgard Trinity, Kyle, who was happy about her for still being loyal to them, makes her the number IV of the Midgard Trinity. Later on, Naga, rushes to Ayano to tell her that the "War with Lucian and Reviera" (The Primary Antagonists of the series in Remnant: Change the World!), She participates in the war secretly, However, she is killed and her body is left in Liberty City, Final Remnant an associate of Kyle Luminara tells Final to reincarnate her. Sucessful in this, Ayano Katagiri, wakes up from a long sleep in Liberty City, now known as "The Worst Place in Kingdom Hearts"... Thus, starting the Kingdom Hearts: The Final Remnant storyline.

"Would you like me to save you King Mickey? Just kidding!

Malevolence Crystalised is killed by Noah for being a "traitor" and leads to Kate's battle against Noah.

After her death she wakes up as the Don of the Remnant Family promoting war against Kingdom Hearts with her new name Ayano Katagiri.

"Your existance is worth nothing!

Ayano Katagiri was the experiment in the Saint's Row, Later on in the story Final Remnant is introduced to Ayano. She was treated as if she was the daughter of Final Remnant. Before the Main Storyline, Final Remnant was killed by a man named "King". Angred about this Ayano Katagiri forces all leaders of the Saint's Row to quickly make her Don, Killing Dark Tanaka in the process. She eventually takes the title Don of the Remnant Family. And finally Kill King. Happy about his death, Ayano Katagiri makes Xin a member who assisted Ayano in King's execution into a Capo making Xin and her the people who control the whole Saint's Row after this. Is the Party at Cataligula's Casino. The Saint's Row forces Ayano Katagiri to wear a dress much to her anger. In her Future Apperance in Dissidia. She will be wearing her dress from the Party at Cataligula's. Xin eventually leaves Liberty City and goes to China to search for Huang Lee his friend in his past life. However, he is not sucessful in this. And returns to Liberty City. After this Ayano Katagiri is commands Xin to take December to the Saint's Row, starting the first mission Remnant.

The World is Mine Arc

Ayano Katagiri, kills Xin in the end of the chapter, because of his connections to Kyle Remnant, Aeon Lunar and The Cataligula Palace Mafia. At this point Vector Zero is awakened in Dukes, Liberty City. Asking who is the source of all the unfortunate happenings in Liberty City, Later on, Naga, tells him that Ayano Katagiri the Leader of the Saint's Row is behind all the events occuring, He eventually plans on going to Alderney....

Are you sure your the main character?

Niko Bellic, arrives from his trip with Roman to Vice City to Liberty City. (This storyline event follows the Revenge choice in Grand Theft Auto IV in which Roman will live) later on, he is caught by the Saint's Row for trying to Rob a bank, he is eventually brought to Ayano, and making a deal for him to be the assistant of Ayano (Due, to Xin's death), Niko, agrees and an allience is made with Niko and Roman Bellic, He is brought to Central Station, in San Andreas to make a deal with the Grove Street Families... (to be continued...)

Ayano Katagiri like her past self and her forms and apperances she is always flat chested, imature and tsundere. A unique part about her is the soul on her left eye which refereces "Hitman Reborn!", Basically she has longer hair and wears Ribbons which is a reference to the "Ribbons" as her middle name in the past. Ayano "Soul" Katagiri the soul in her name is a reference to the Anime "Soul Eater", Another reference to this is her eye which has a Soul like Flame which appears in her eye once a battle begins. Compared to her past self she has Blue eyes insted of Gold but this eyes will turn Gold in the near end of the series and stays Gold or Yellow in her Future Apperance in Kingdom Hearts: The Saint's and Diablo's and Kingdom Hearts: The Afternoon of Darkness of Priere but as the Power of Existance she has Black hair and Violet eyes. Her in the Final Remnant will return once the "Restore Ayano!" bill is passed. However, Her future apperances uses her Final Remnant apperance with an exception of the series said above. She also recieves a Large canon and Sword in Power of Existance mode. However, she has a diffrent apperance in her Final Limit Break, Having Dark Celestial and the "Black Rock Shooter" armor.

Ayano Katagiri is a very unusual Antagonist who is Immature, Tsundere and Arrogant. She is very talkative and makes multiple comments during a battle unlike her perosnality five years ago who reamins mute. She can also be considered Benevolence (The reverse of "Malevolence"). Because of her personality she becomes a Protagonist later in the story. She is Polite, Silent and Shy in The Afternoon of Darkness of Priere. In the Saint's and Diablo's she retains her Final Remnant personality, However, a bit more respectful and friendly.

Ayano Katagiri's Geass is called "The Seal of Time" which allow's her to stop time for Five Seconds.

This geass is considered to be the "Seal of Recreation" allowing Ayano Katagiri to change Life and Reality it's limits are as follows:

Has the ability to use any Item/Weapon at a level that exceds all, however, this ability does not allow the useage of Cinematic Executions or "Finishing Moves", and only allows regular attacks.

The Death Note is a Major weapon used by Ayano Katagiri via L Lawliet (Reasons Unknown), This is also why Albert Lawson died with only one shot from Xin, Ayano Katagiri secretly uses the Death Note and is not shown in any part of the Legacy and Saints and Diablo's storyline, and briefly in The Final Remnant. This is extremely powerful as the user can quickly kill anyone with this ability, Moreover, Ayano Katagiri has less rules for her Death Note, the rules follow bellow,

So far, this is possibly the most powerful weapon, with the most requirements.

Is a weapon pack that Ayano uses throughout the series (Excluding the Death Note due, to its hidden apperances), As the weapon pack has three weapons/shields

Is a massive cannon used by Ayano in the Final Remnant, Saint's and Diablo's (As she uses her primary weapon secretly the Death Note) and Legacy, this has a very long range and strangely, a very small blast radius (to prevent it from Overheating). Uniquely, it appears in both main forms of Ayano. (Excluding the Death God form).

Is the sword (A Black Celestial Calibur in Destroy Mode and Insane Black Rock Shooter forms). This has an ability to create Black Crystal over the battle field and use it as an advantage. While on normal form, It is a typical sword with Data abilities to attack on the enemies weak points.

Is a shield which is used in Insane Black Rock Shooter and Destory Forms. It has never been used and is only shown in pictures.

Ayano Katagiri's most powerful known form. It uses the souls of human that are nearly dead, She uses this form with a Keyblade (However, hides it in an apperance of a sword.) along with the Ninento no Shana a large firearm which is used to kill enemies that are exteremly powerful. The Msot powerful version of this form is the Insane. Black Rock Shooter, which allows her to have extermly High Stat's. 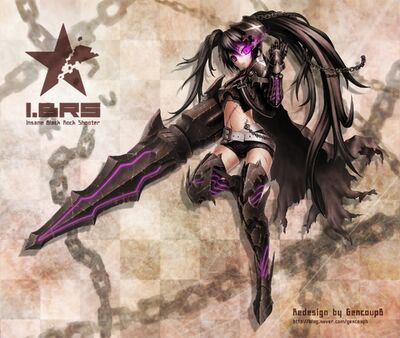 Is Ayano Katagiri's form which terminates the use of a gun and replaces it with "Black Rock Shooter" a weapon used by Ayano Katagiri, which contains Unimaginable power, and is rarely used by Ayano Katagiri, In this form she has the ability to use "Disgaea Abilities" and "Re: Wired Geass, The Zero" one of the most powerful abilities used by Ayano. She is arguably the most Powerful boss once her Disgaea abilities are available. The initial abilities are "Lightning Speed", "Ultimate Desturction", "High Inteligence", "13 Sight" and "Indestructable Body". She is so far, extremly over powered once this for is used, Moreover, this is rarely used and will only be used in a "Life or Death Situation". Her armor is the Holy Blade Order's top secret weapon the "Unholy Celestial Armor" which was originally for Noah, but, killed by Malevolence. This is the most strongest form of Ayano.

"Be gentle!" (Start of the battle)

This quotes is only used during her time as a Superboss

Invasion (This plays once she makes an apperance in a Cutscene)

Ayano Katagiri in he apperance in the party in caligula's Casino.

Ayano Katagiri in a chibi-er form

Ayano Katagiri in the Final Remnant.