This article, Amarex, is the creative property of Kiarichan.

Amarex The Devastating Winds, is rank VI in The Rebellion from Kingdom Hearts: Foul Remembrance. She commands the Paladin nobodies.

Amarex has long silver hair in a side ponytail that is tied with a black band. Her outfit is a fancy white dress with black lace at the top. A large black bow ties right underneath her chest. Over that dress is a white bolero that has black trim and buttons on it. The sleeves come down to right over her elbows. A gold chain with a red rose attatched changs from her neck down to her ribbon. A under-skirt of black gauze is seen when she jumps or runs. She has a pair of black tights under the dress. Her shoes are red ballet flats with a black bow on them and black soles. Unlike her other, she has red eyes instead of blue and the blue tint in her hair is slightly toned down.

She is a very kind and caring soul, helping all who are hurt and keeping peace everywhere she goes. Rixa was found by her when he was fatally ingured, so she nursed him back to health. Also, whenever her friends are sad, she helps them feel better

Marae the air nymph lived on the planet Holy Arxaith for her whole life until the heartless attacked. She was captured and was turned into a nobody, and wandered until Saix found her. He brought her back and she was made rank XIX in the Organization. She lived there, soon becoming friends with Xaed, for a long time. She and Xaed spent their time in the Library in Radiant Garden like most of the nobodies did. One day they did resaerch and found out about The Dreams and the Waters of Hope. They told Xemnas, who didn't believe they were right about it and he threw them with the them into the dungeon. She was given her Marks of Shame and thrown out of the castle. She wandered until Xaed found her and happily brought her to The Hideout. There she lived for a while, training, reading in the library, ect. until the day Sora, Riku, and Kairi found the hideout. She was nicest to them and gained their trust quickly, while the others didn't as quickly. She made the others trust them and they all decided to find their hearts together. That's when the adventure began...

Rixa and Amarex soon fell in love. Rixa was very curious when it came to life and death, and that brought about Amarex's death. Rixa acidentally brought Organization XIII back to life and was forced by them to kill her. An arrow was all it took. Rixa cried as he killed her and tried to run away, but was soon caught by the rest of the rebellion. He tried to explain to them what happened, but Xaslamach loved her too, and avenged her death by killing Rixa. When you go back to the Graveyard of Dreams, you can find both of their crystals.﻿

Her weapons of choice are spears, but she can also use Rapiers like Amy Sorel

She preforms medium-speed, powerful atacks along with powerful whitemagic and de-buffing skills.

She can also use powerful de-buffing on the enemy party. Some of her de-buffing skills are:

Her theme is Eternity: Memories of Lightwaves from Final Fantasy X-2 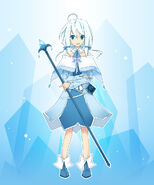 Marae at a young age

Her EX Mode
Add a photo to this gallery

Retrieved from "https://kingdomheartsfanon.fandom.com/wiki/Amarex?oldid=56869"
Community content is available under CC-BY-SA unless otherwise noted.